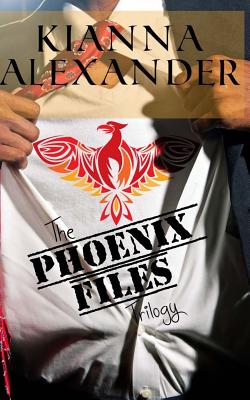 Paperback Description:
The PHOENIX Files Trilogy Heat Level: Sensual/ Steamy (Love scenes are present but are NOT graphic) Time Period: Contemporary Paranormal Romance Length: 87,600 words ~PHOENIX Files- Fierce fights beneath the southern city lights.~ From the city streets to City Hall, from the “All American City” of Fayetteville to the "City of Oaks", (Raleigh), North Carolina is rife with crime and corruption. Law enforcement, understaffed and overextended, do their best to stem the growth of violence and vice. But when they find themselves unable to break the case, they turn to a shadowy enterprise that utilizes the unique talents of the most gifted citizens among us: PHOENIX. The organization was founded in 1972 by Lt. J.T. "Phoenix" Pierce, a veteran of the Vietnam war and a proponent of the use of powers such as telekinesis, shape-shifting, and sorcery for the good of the people. Darkness Rising: City council secretary Lalah Norris is propelled into the center of a scandal. Born of two African American parents with the panthera trait, Lalah’s a no-nonsense woman who, when she finds out about the money laundering ways of the city’s assistant manager Dell Christopher, will risk her job to see him pay for his crimes. Little does she know, the loss of her job will be the least of her worries. When she refuses to be intimidated by Dell’s thug, she’s kidnapped and locked away. Rescue comes in the form of a mysterious Chinese man, Junjie Yu, but Lalah finds herself being taken against her will for a second time. When the night is over, she’s forced to join PHOENIX, a covert organization that assists law enforcement on the Federal, state and local level through the use of shifters, sorcerers, and all manner of ’gifted individuals.’ But which will be more dangerous: her new role in the secret organization, or her burning attraction to Junjie? Embrace the Night: John Groves is a professor of World History in Raleigh by day. But outside the world of academia, he uses his special talents as a telekinetic to fight crime as a member of PHOENIX. He’s strong, steady, and accustomed to being in charge, in both his careers and his personal life. Having lived on his own since the age of 17, he’s never had to bow to anyone’s commands since childhood- especially not a woman. Tatiana Yates owns a beauty shop in downtown Durham. After leaving the hot curlers and shampoo bowl behind, she releases the tigress within, running free in the forests around RTP. And ripping the bad guys a new one as a seasoned PHOENIX operative. She worked hard to study cosmetology, gain experience in the field, and move from employee to businesswoman. She’s worked her way up the PHOENIX ranks to lieutenant, and won’t be disrespected by anyone. Midnight’s Serenade: Dr. Le’Kisha Byrd, is a modern-day succubus and brilliant scientist, who just created something that will have a lasting effect on world affairs. It’s the culmination of years of hard work and research- but now that’s she’s completed it, everyone wants to get their hands on it- including those who would use it for evil. Protecting her work, as well as her own life, is getting to be too much for even her sharp mind. So she confides in an old family friend. Little does she know, he intends to arrange protection for her, whether she likes it or not. Marcelo Spirelli’s day job is landscaping for his own business. When he puts away his equipment, he serves the greater good as a PHOENIX operative, where his skills at sorcery are always a valuable asset. He takes his PHOENIX work very seriously, and doesn’t play games when he’s on the job When he’s assigned his first solo mission- protecting Dr. Byrd from her many enemies, he’s not exactly thrilled. A past experience has shaded his opinion of her. To his mind, succubi can’t be trusted, and it will take a hell of a lot for him to alter his belief.

More books like The Phoenix Files Trilogy may be found by selecting the categories below: