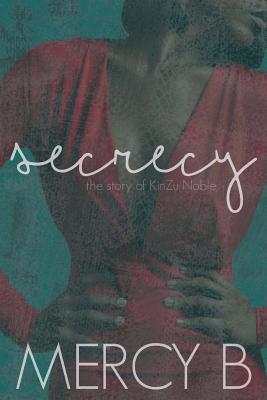 Secrecy: The Story of KinZu Noble
by Mercy B.

Book Description:
“She wasn’t exactly sure when it happened, or even when it started. All she knew for sure was that right here, and now, she was falling hard, and she could only pray that he was feeling the same way." A redefined and reinvented KinZu Nobel has consumed enough heartache to last a lifetime. The perplexity of a relationship is much too daunting, so she’s placed a lock on her solicitous heart. Replacing love, she masks the desire with money and the finest material possessions. Her newly found paramour is none other than the familiar chiming of her phone, alerting her of a fresh deposit. Swimmingly, KinZu has become the highest paid escort in the city of Philly. Averaging 100k per client, settlement was the furthest from her mental. However, upon a chanced assemblage, KinZu is left to combat the undeniable allurement of the embossed, blue-eyed, gun-totting, rude, handsome Frenchman -Saeed Chaplin. KinZu slips, falling without hope, into his arms. She countermands her very own beliefs, allowing the deadly drug known as love to penetrate her being. Unfortunately, she’s completely unaware of the forbidden favors that she’s indulging in. For once, KinZu wonders if love will lead the way, or will she be just as lost as before when the foundation finally crumbles?

More books like Secrecy: The Story of KinZu Noble may be found by selecting the categories below:

Tell us what do you think about Secrecy: The Story of KinZu Noble.