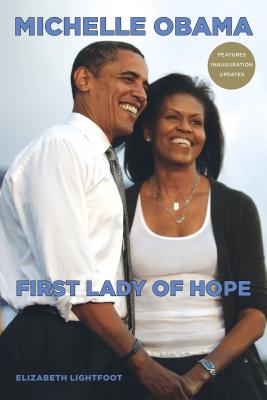 Read Our Review of Michelle Obama: First Lady Of Hope

Paperback Description:
There is no one quite like her. Michelle Obama. This is the first book to tell the astonishing story of a woman whose intellect, verbal flair, and poise are certain to make her one of the most influential First Ladies in history. A woman whose remark, “For the first time in my adult life I am really proud of my country,” did her husband’s campaign no good. A woman whose impassioned speech to the Democratic National Convention may have helped win him the Oval Office. A woman touted as a future presidential candidate herself. Readers are given a revealing and intimate look at Michelle Obama’s remarkable life?from her Chicago childhood to her education at Princeton and Harvard, from how she first met Barack Obama at the prestigious law firm where they were the only African-Americans, to her role as his closest adviser, and to her own political beliefs. For Michelle, family comes first, and?like so many women who struggle between family and career?she seriously weighed her husband’s presidential ambitions before giving her stamp of approval. Apparently she struck a hard bargain: he had to give up smoking.

More books like Michelle Obama: First Lady Of Hope may be found by selecting the categories below: