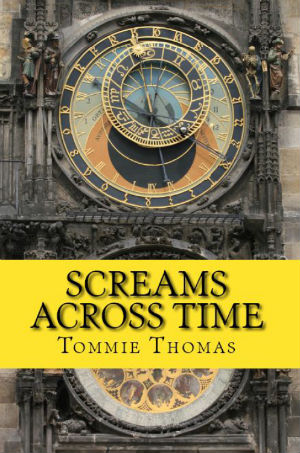 Screams Across Time
by Tommie Thomas

Book Description:
Fog enshrouds the road leading to a rural country Church encased in flames for a bomb has reduced it to rubble. A few minutes ago it was dinner in the kitchen for those who had just rendered Service to God, but now they are on the road to Heaven because terrorists have completed their work The Churchyard shows them jubilant over their wicked deed. Two FBI Agents, 3 KKK in hoods and 3 civilians. Unseen by their eyes, a figure trapped in the cellar views them with one goal in mind; retribution for the family they just killed, the Kenyatta family. Samson Kenyatta, using his phenomenal strength escapes the pit of death and as he steps outside in the Churchyard, God answers his prayer for he gives him a sign as the fierce lightning forms a cross and put into him the spirit to avenge those who have been victims of hate and wrongful death to subdue their screams across time. Samson begins his quest in Quitman, Georgia as he pursues them with a vengeance to New York, Wisconsin, Jamaica, Florida, Virginia, Baghdad, Detroit and finally Paris, France. There is no escape for the terrorists who have Detroit on lockdown with the Mayor and his family as hostages and a nuclear weapon to erase Detroit off the face of the earth. Terror for the terrorist is the main menu Samson delivers to bring these villains to nothing and silence the fever pitch screams of those who are screaming across time. This book thrills you with delight! Best Wishes! $21.95