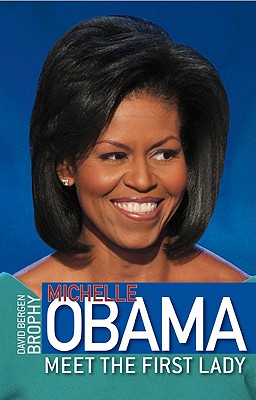 Read a Description of Michelle Obama: Meet The First Lady

’A tall 44 year-old African-American woman took her place at the podium and began her speech at the Democratic National Convention. As the 4,500 people in attendance listened along with millions of prime-time television watchers at home, the woman who would be the first African-American First Lady in U.S. history began to tell her story. ’Each of us,’ Michelle LaVaughn Robinson Obama said, ’comes here tonight by way of our own improbable journey.’
This is the story of Michelle Obama's journey.’
’Excerpted from The Prologue (page 1)

Apparently, in anticipation of Barack Obama's historic win, it occurred to lots of authors to get a head start on a biography of his wife, since she hadn’t yet written one herself. Michelle Obama: Meet the First Lady, designed with the 8 to 12 year-old demographic in mind, wins the race in terms of adolescents, and does a decent job in covering considerable ground in about 100 pages.

After an overview of her hometown, Chicago, we learn about that Michelle inherited her enviable work ethic from her parents, Fraser and Marian Robinson. Her dad spent his entire career with the city's water department, although he was also a precinct captain who helped to get out the vote for the Democratic Party. Her mother was employed as a secretary until she had children and decided to devote herself to her kids full-time.

Michelle only had one sibling, her big brother Craig, an admired role model whose footsteps she would follow to Princeton University. Despite his presence on campus, she apparently still felt ’like an outsider,’ especially because when she arrived as a freshman ’the mother of one of her white roommates rushed to the campus housing office to demand that her daughter be moved immediately.’

However, Michelle got the last laugh, graduating with honors before moving on to Harvard Law School. There, she studied under noted African-American attorney Charles Ogletree who remembers her as ’brilliant’ while another professor, David Wilkins, recalled her as ’decisive.’

The readers curious about romance might most enjoy the chapter recounting how Michelle met Barack. There she admits to being a little skeptical about this brother who ’sounded too good to be true.’ But his persistence ultimately paid off with a wonderful marriage which would be blessed with two beautiful daughters, Malia, now 10, and Sasha, 7.

The book also covers the presidential campaign before closing with Michelle musing about what life will be like after the inauguration on January 20th. ’My immediate priority will be to make the White House a home for our daughters,’ she admits. ’It's going to be a big change for them, and they are going to need my full attention.’

Sounds like the girls are going to be fine, given that their mom hasn’t forgotten what matters most. Overall, pleasant and informative enough to engage any youngster curious about the sort of challenges encountered and overcome by Michelle Obama en route to becoming First Lady.