Book Review: Down Home With The Neelys: A Southern Family Cookbook 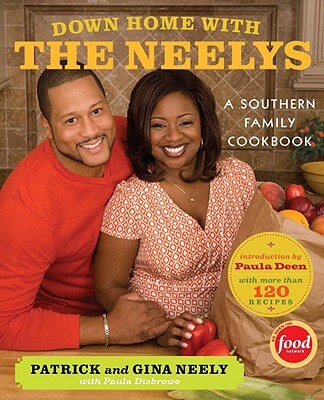 Read a Description of Down Home With The Neelys: A Southern Family Cookbook

’Hey, everyone, first of all, I want to thank you for reading our book and watching our show. We had no idea what we were getting into when we let television cameras into our house, but’you know what?’it's been fun. The show has allowed us to share our recipes with a lot of people, many of whom now come and visit us at the restaurants. It's also allowed us to tell some of our story.

We decide to put it all down on paper because folks kept asking. They’d send us letters, asking for our recipes. They’d send us e-mails, asking how we met. So we figured, give the public what they want. And that's pretty much how this book was born.’
’Gina Neely in the Introduction (page 3)

It's impossible to say what's more appealing about this opus, the authors' sweet love story, or their succulent recipes for barbecued food and all the fixins. The back story is that Patrick and Gina Neely had been high school sweethearts, but didn't actually marry until after reuniting in their native Memphis after attending different colleges out of town.

Today, the blissful couple has not only been blessed with two beautiful daughters, Spenser and Shelbi, but they also own one of the most successful barbecue restaurant chains in the country, Neely's Bar-B-Que, with locations in both Memphis and Nashville. In 2008, they started co-hosting their own cooking show on the Food Network, ’Down Home with the Neelys,’ and in response to the series' popularity they decided to share their trade secrets in this practical cookbook of the same name which arrives attractively illustrated with 75 mouth-watering photographs.

Here's one thing I noticed right off the bat about these recipes: they tend to go heavy on bacon fat and butter. No wonder the food tastes so delicious. So, do me a favor and just don't go overboard and rely on this tasty tome 24-7 or your arteries are likely to be clogged in a week.

That disclaimer out of the way, among the scrumptious recipes revealed here are ones for Crusty Cornbread (contains bacon fat), Gina's Perfect Rice (with butter), Pimento Cheese Melts (with strips of bacon), Spinach Salad with Bacon, Two Potato Salad (with strips of bacon), Southern Creamed Corn (with bacon fat, butter and heavy cream) and Sauteed Kale (with bacon). Even the Caribbean Rum Nuts recipe calls for butter.

Listen, you can't argue with success, and I'm certainly not complaining, simply asking you not to go hog wild, pardon the expression. To be fair, the Neelys include plenty of healthier alternatives, like Fried Green Tomatoes (What came first, the movie or the dish?) which calls for vegetable oil instead of lard. But I suspect that any gourmet interested in Southern cuisine will go right to the pages on such down home delicacies as Ham Hocks, Spicy Fried Chicken, Old-Fashioned Glazed Ham and, of course, the Neely's trademark dish, Memphis-Style Barbecued Pork Ribs.

With Father's Day's around the corner, I couldn't think of a better way to drop a hint that it might be time for him to fire up the grill.

Read Knopf’s description of Down Home With The Neelys: A Southern Family Cookbook.