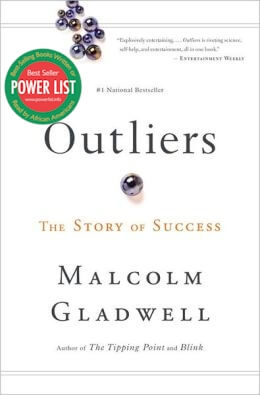 Read a Description of Outliers: The Story of Success

’This is a book about outliers, men and women who do things that are out of the ordinary. I'm going to introduce you to one kind of outlier after another: to geniuses, business tycoons, rock stars, and software programmers. In examining the lives of the remarkable among us, I will argue that there is something profoundly wrong with the way we make sense of success...

People don't rise from nothing. We do owe something to parentage and patronage’ It makes a difference where and when we grew up. The culture we belong to and the legacies passed down by our forbears shape the patterns of our achievement in ways we cannot begin to imagine.

It's not enough to ask what successful people are like, in other words. It is only by asking where they are from that we can unravel the logic behind who succeeds and who doesn't.’
’Excerpted from Chapter One (page 17-19)

Why are so many major league baseball players born in the Fall, and so many pro hockey players born during the Winter? What do the Beatles and Bill Gates have in common? Why do Asians generally excel in mathematics? Why isn't IQ a reliable predictor of achievement?

These are some of the intriguing questions answered in Outliers, the latest examination of human idiosyncrasies by the New Yorker Magazine's Malcolm Gladwell whose previous two books, The Tipping Point and Blink, were both #1 best sellers as well. Gladwell, the son of a British engineer and a Jamaican psychotherapist, has a knack for researching arcane subjects and breaking down his surprising findings into readily-digested layman terms. What's more, he has an engaging writing style which turns the most mundane topic into a fascinating curiosity.

In Outliers, his quest was to probe the secrets to success. Conventional wisdom attributes extraordinary achievement to some combination of intelligence, luck and a good work ethic. But Gladwell uncovered some bizarre explanations for why many manage to make it to the top of their chosen professions.

For example, since little league hockey players are grouped by the calendar year in which they were born, those with birthdays in January, February and March enjoy an undeserved advantage just because they’re a little older than the rest of the competitors in their age group. This leads to their being preferred by coaches and thus enjoying more playing time, simply by virtue of their being more mature. Over the course of a childhood, the extra attention translates into a maximized potential, hence the preponderance of pros born during the calendar year's first quarter.

Other novel chapters assess phenomena ranging from a ’town in eastern Pennsylvania where no one has ever had a heart attack’ to the connection between pilots' cultures and plane crash rates to why 10,000 hours of practice are needed to master a skill to why there is little difference between geniuses with I.Q.s of 150 and 200. Overall, Outliers is a compelling page-turner which often reads like an edge of your seat mystery thriller, even though the information ultimately unearthed by the author isn't guaranteed to improve your odds of joining the elite class which has so captured his imagination here.