Book Review: Buried by the Times: The Holocaust and America’s Most Important Newspaper 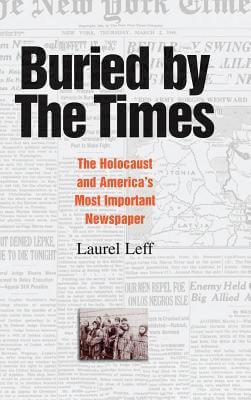 Read a Description of Buried by the Times: The Holocaust and America’s Most Important Newspaper

"The New York Times failed in its coverage of the fate of European Jews from 1939 to 1945. The assimilationist tendencies of the Times' Jewish owner, and the ethos of mid-century America all led the Times to consistently downplay news of the Holocaust. News of the Nazis' Final Solution was hidden from Times readers and- because of the newspaper's profound influence on the media- from the larger American public."

When Jayson Blair was fired by The New York Times a few years ago, you would have thought that it was the first occasion on which the newspaper found itself immersed in scandal. After all, most people treated the disgraced reporter's having falsified news stories as an unpardonable sin committed against a supposedly sacrosanct institution.

At the time, however, Blair, in defending his unethical behaviors as the commonly-accepted, company protocol, made a case that he was just an easy scapegoat because of his black skin. It is for this reason that many might now find Buried by the Times all the more fascinating.

The book is about the same paper's deliberate efforts to minimize the Holocaust, even though it was well aware of the mass-scale pattern of human rights violations unfolding across Europe. For instance, in 1939, the Times uncovered evidence that marauding German invaders, in the wake of conquering Poland, had demanded the services of "100 young Jewish girls" in order to "quench their desires."

But publisher Arthur Sulzberger chose not to run the story, after checking with his bureau chief in Berlin, concluding that the allegation must have been untrue because Nazi "racial defilement legislation" made it illegal for an Aryan to have sex with a Jew. So, the idea of virtuous members of the so-called master race committing such rapes was deemed not newsworthy, because Germans themselves had declared it unthinkable .

Countless such incidents were ignored, misreported or relegated to tiny misleading mentions in the back pages, even as the abuses gradually escalated to wholesale genocide. No wonder the world's collective jaw dropped when the concentration camps were liberated during the Allies' freeing of Europe.

What makes the earlier omissions fascinating is that The New York Times was owned by Jews, albeit the Jewish equivalent of Uncle Toms. Instead of publishing "All the news that's fit to print," as their logo claims, they preferred to cater to the tastes of the WASPy, high society elite with which they sought to integrate. At least this is the thesis of Laurel Leff, author of Buried by the Times:  The Holocaust and America's Most Important Newspaper.

Leff, a professor of journalism at Northeastern University, easily proves a conspiracy of silence, documenting case after case of an ineptitude bordering on self-hatred. Often the betrayals almost rise to the level of conspiring with the enemy, such as the paper's one-sided coverage criticizing the flight to America taken by some prominent French Jews, insinuating that the rich refugees were somehow unpatriotic for abandoning their homeland at a time of national crisis.

Again and again, however, escapees related all the rounding-up, deportation, and unspeakable horrors which was transpiring. But their pleas for publicity which might embarrass Hitler into sparing the lives of Jews still in his clutches simply fell on deaf ears unwilling to ruffle feathers.

A chilling reminder of Edmund Burke's enduring aphorism that "All it takes for evil to flourish is for good men to do nothing."

Read Cambridge University Press’s description of Buried by the Times: The Holocaust and America’s Most Important Newspaper.