Book Review: The Neoconservative Revolution: Jewish Intellectuals and the Shaping of Public Policy 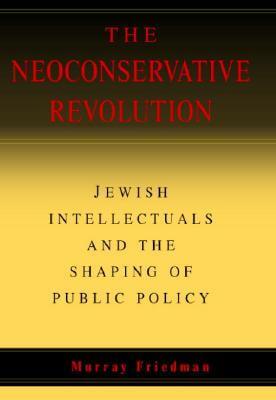 Read a Description of The Neoconservative Revolution: Jewish Intellectuals and the Shaping of Public Policy

’In the United States, Jewish political conservatism was evident from the founding of the republic until well into the 20th Century’ In the 19thCentury, many Jewish leaders were also conservative on the issue of slavery; relatively few joined the abolitionists, and many, in fact, opposed them. What the foregoing suggests is that despite the popular image of pervasive Jewish liberalism, there has always been a significant conservative Jewish tradition in this country.

The American invasion of Iraq has, arguably, left the nation more divided politically than at any time since the Vietnam War. The essence of the debate has revolved around the Bush Doctrine, which, after September 11, 2001, established the rationale for preemptive (unilateral, if necessary) military action. Critics accused the hawkish neocons of unduly influencing an inexperienced chief executive and encouraging him to undertake a reckless, imperialistic adventure.

There is no mistaking the emphasis placed by some on Jews as responsible for the war, and a whiff of anti-Semitism that permeates some of the criticism. How did these conservatives, neo or otherwise, come to play such a role? Where did they come from, and what does that portend for America's future? These are matters I will examine in the pages that follow."
’Excerpted from the Introduction

Most people associate Jews with liberal leanings, which might be why the rise of the neocons has so many people scratching their heads. For this powerful collective of public intellectuals, ostensibly comprised mostly of members of the Jewish intelligentsia, has managed to set both American domestic and foreign policy, despite constituting a tiny fraction of the political landscape.

At least this is the contention of Murray Friedman, historian, author, and vice chairman of the U.S. Civil Rights Commission under President Reagan. In his eye-opening expose’, The Neoconservative Revolution: Jewish Intellectuals and the Shaping of Public Policy, Friedman points out that while many sets of social engineers have advocated overhauling a society, few have succeeded to the extent of the neocons.

Naming names and some suspicious liaisons among this multi-tentacled set of strange bedfellows, he reveals a web of influence likely to surprise even the most informed and cynical of C-SPAN junkies. For instance, you probably know that frequent Fox News Channel contributor Bill Kristol is the editor of a paper called the Weekly Standard. But here, we learn that the fledgling rag only has a circulation of only about 80,000 and that it was underwritten by Fox itself. Talk about the appearance of impropriety!

Though all of the above are Jews, Freedman states that what really sets them apart from other conservatives is not their ethnicity but their rabid militancy.

He even identifies a set of token black neocons, led by the likes of Shelby Steele, Glen Loury, Thomas Sewell, Stephen Carter and John McWhorter whose limited function has been to run interference for a regressive philosophy hell-bent on dismantling affirmative action, welfare, school desegregation, voting rights and other advances gained in the wake of the Civil Rights Movement. And the author credits Kristol with single-handedly torpedoing then President Clinton's plans for nationalized health care. Furthermore, the book indicates that a couple of these African-American apologists have wised-up and distanced themselves from spouting a self-hating ideology, the bulk continue to parrot the party line.

But Freedman is at his best when theorizing about why this clique of Jews might have sought so much power, developed tunnel vision in wielding it, and courted the support of Bible-thumping Christians while tossing former allies like gays and women under the bus. Few may have noticed while the coup was occurring, but at least The Neoconservative Revolution, after the fact, relates the fascinating back story of how the prevailing American mindset has been reshaped to the point where the handling of Katrina and the unprovoked war of aggression in Iraq are no longer national disgraces but simply signs indicating that the neocon policies are being fully implemented.