Book Review: Standing in the Need of Prayer: A Celebration of Black Prayer 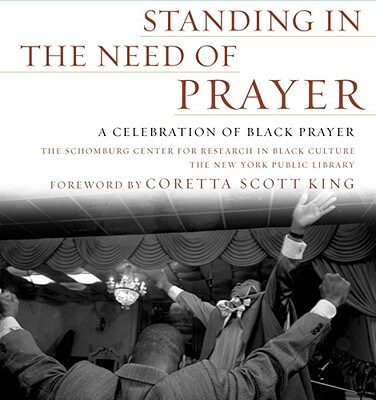 by Schomburg Center for Research in Black Culture

Read a Description of Standing in the Need of Prayer: A Celebration of Black Prayer

Standing in the Need of Prayer is a book dedicated the diverse and powerful subject of Black prayer. The photographs and other anthropological artifacts were compiled by the Schomburg Center for Research in Black Culture in New York. In fact, Howard Dobson, the director of the center is the driving force behind this visually stunning book. The book primarily draws the conjecture that spirituality and particularly prayer are very much a part of Black culture. The research encompasses a multinational viewpoint of Blacks through out the globe. It hones in on the ancestors of the people whom were displaced during the African Diaspora.

This book held special interest for me because in the midst of my personal spiritual journey I have discovered something blasphemous. Looking around me at the many people of different faiths baits the question, ’Aren’t we all asking for the same thing when we pray?’ Is their some gigantic prayer switchboard that translates our prayer to the same divine being? And if so, why do we make such a fuss about who's getting it right? But I digress’

The book does a good job of entwining the multitude of different religions found in Black cultures around the world. Christianity appears to be the principal religion the book focuses on. This is not an attack on Christianity and its prevalence. Readers should note that historically Christianity was not introduced to Africans as a result of slavery. In fact archeological studies show that Christianity's introduction to Africans predates slavery by at least a hundred years. Never the less, the inclusion of prayers and photographs from religious practices such as Buddhism, Muslim, Catholic, Voodoo, Rastafarian, Jewish, Protestant and Yoruba traditions was quite refreshing.

The beauty of this book would be hard to miss through the meticulous collection of sacred verses. It is however the inclusion of the breath taking photos the drives home the emphasis of the universal language of prayer. Something that is so personal, yet so ecumenical to everyone. There is not a religion in existence that does not place emphasis on the sublime meditation of prayer.

The photographs in particular depicting Blacks in the process of prayer are stunning. One of the most powerful photos in the book is of Martin Luther King Jr. giving prayer at what seems to be a dinner table. The poignancy of the photo is that Mahatma Gandhi, a devout Hindu, is praying with him. This beautiful scene is capped off by a moving foreword giving to Standing in the Need of Prayer by Coretta Scott King. She vividly recalls the importance of prayer to her and M.L. King while leading the Civil Rights movement.

I did not have to look far to find some amazing similarities in the prayers from different religions. They all seem to implore the power of the Devine to intercede or simply to grant peace and calm. It supports the blasphemous thought of all people who pray are praying for the same force that exist beyond this world. A force is known of different names but bestows the same blessings. Maybe with this realization eventually the world's different religious factions can scrap the idea everyone else being wrong and somehow elevating the soul has taken on one path.

I insist that this collection of prayers, meditations, spirituals, and poetry will be a treasure to share with your family. It is a reminder of no matter how we run in the rat race, in the end we are all Standing in the Need of Prayer.

Read Free Press’s description of Standing in the Need of Prayer: A Celebration of Black Prayer.