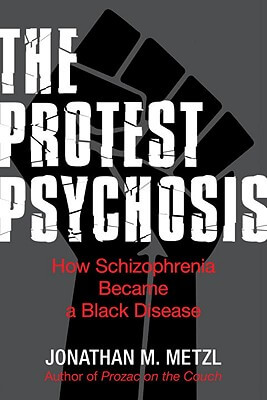 Read a Description of The Protest Psychosis: How Schizophrenia Became A Black Disease

"This book tells the story of how race gets written into the definition of mental illness... The book also shows how historical concerns about racial protest reverberate through treatment institutions and… explores the processes through which American society equates race with insanity.

[The Protest Psychosis] focuses mainly on a series of transformations that occurred during the civil rights era of the Sixties and Seventies [when] members of the scientific community increasingly described schizophrenia as a violent social disease… In the worst cases, psychiatric authors conflated the psychiatric symptoms of African-American patients with the perceived schizophrenia of civil rights protests, particularly those organized by Black Power, Black Panthers, Nation of Islam, or other activist groups…

The result was [that] schizophrenia literally, and then figuratively, became a black disease. And prisons emerged where hospitals once stood."
-- Excerpted from the Preface (pgs. ix-xxi)

Who knew how prophetic the opening lines of Allen Ginsberg's epic poem
"Howl" would one day prove? Originally published it 1956, it began: "I saw the best minds of my generation destroyed by madness, starving, hysterical, naked, dragging themselves through the negro streets at dawn…"

Well, as a product of that era, coming of age in the late Sixties, one thing I couldn't help but notice was the frequency with which brothers I knew around my age, particularly intelligent, socially cnscious ones, were being committed to mental institutions. At the time, I simply assumed that the repeated diagnosis of schizophrenia was somehow scientific, and the result of an unfortunate genetic flaw, not the consequence of a diabolical plan similar to Cointelpro, the FBI's counter-intelligence program designed to imprison as many progressive-thinking black folks as possible.

Better late than never, and thanks to Dr. Jonathan Metzl we now know the truth about the over-diagnosis of black males as mentally unstable, when the discontent they were displaying was probably just a very healthy response to the frustrations of trying to survive in a racist society. In The Protest Psychosis, Metzl, a Professor of Psychiatry at the University of Michigan, blows the whistle on the unethical practices of his colleagues who had prescribed powerful medication for African-Americans exhibiting what's been described clinically as "delusional anti-whiteness," "hostile and aggressive feelings" or who adopted African or Islamic ideologies or names.

Meanwhile, trade advertisements for antipsychotic drugs like Haldol "back then showed angry black men with clenched Black Power fists," thereby suggesting that such "symptoms of social belligerence required chemical management." By the way, the book includes an actual reprint of that ad for your perusal.

More importantly, this text serves as a seminal primer in understanding the explosion of the number of black men behind bars we witness all across the United States today. For, as the author describes it, "The notion of recuperation fell by the wayside as hospitals became prisons… Empathy gave way to fear, fear to anger, and anger ultimately to indifference. Everything changed when mental health was taken over by corrections."