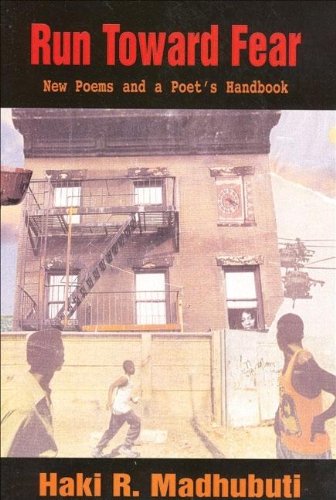 Read a Description of Run Toward Fear: New Poems and a Poet’s Handbook

This book is actually done in two parts. The first is a collection of personal poems. The second part is forty pieces of advice for poets who wanted to know but where too afraid to ask.

Run Toward Fear is Haki Madhubuti's newest collection of poems written from his stream of Black consciousness. His life serves as a provision of experiences that provide fodder for poems that flex with emotion. Madhubuti is an educator even in his poetic endeavors. His writing is a lens shot of personal historical icons that have etched their own poetry upon his mind set.

The brilliance of Madhubuti is not in flowery prose, nor empowered rants that call for revolt. It is in an intense conviction of a personal truth that lives in his every stanza. A truth that is reflective of his compassion for people and his disdain for bullshit. His poems celebrate as well as chastise. The language of his poetry is deliberate in its ability cause pause. Madhubuti's forte is not only to paint his readers a picture but also to hand them a brush so that may find their vision.

Run Toward Fear does exactly what its title implies. The poetry of this collection is fearless in its exposition of personal sensitivity from an author sometimes identified as being very stoical. His odes to such heroes as his mentor Gwendolyn Brooks, Amiri Baraka, Betty Shabazz, and his endeared mother are entreated homage through verbal libations.

Haki Madhubuti has put together an interesting piece of work with Run Toward Fear. It should stand as one of his better collections, and definitely worth the price of admission.

I have a quick note on the Poet's Handbook part of the book. Madhubuti has put together forty pieces of advice for the beginner to the advanced poet who is curious about what it takes to be a writer. I applaud him for his congenial anecdotes that are often funny as well as poignant. As a publisher, writer, and educator who is bombarded with persistent inquiries about the wisdom producing timeless poetry, Haki Madhubuti has put together his abbreviated notes of how to write be poet just like me. They are amusing, insightful and yes, very useful’

*** Author's note: I am writing this as unbiased as possible. When I met Haki Madhubuti I was not fan but I was very familiar with his work. These observations are of a personal and professional nature. ***

I had an unforeseen opportunity to spend a day with Haki Madhubuti. I was approached by the organizer of the event about a chance to interview Haki for aalbc.com. I somehow ended up picking him up from the airport and chauffeured him around for the entire time he was in town. He came to Indianapolis to participate in an event that failed to live up to its billing. The event was supposed to draw hundreds but instead it garnered approximately 13 people counting Haki and I. Needless to say he should have been disappointed and pretty upset about being misled about the size of this event. But this is where the story gets interesting’

The most intriguing aspect about this entire scenario was my opportunity to study Brother Haki (referred to as such with his permission). He is a man that exudes intensity. He is somewhat quiet and very deliberate in his observations. He always appears to be studying his surroundings, always learning and noting his interactions.

Haki Madhubuti's dignity and intelligence is what stands out the most. Even amongst all the potential frustration what was going on, he displayed no angst, no ill will, not a hint of frustration. He actually took the organizer to the side at one point and educated him on the possible mistakes that led to the less than stellar attendance of the event. Brother Haki was cordial and amicable to everyone in attendance.

He actually took over 2 hours to speak to this small group of people about his life and his poetry. He spoke in depth about the journey of his life. The wrongs turns that led him to more wrong turns. He reflected on days of Don Lee, jazz fanatic and "player, player" extraordinaire. Brother Haki also spoke in deep awe of his deceased mother and his younger sister. He talked openly about the incredible beauty of his mother and the pain that her beauty attracted to her.

All the while he was talking about what gave him the impetus to write the poems that he does. Haki Madhubuti can tell you about pain, pleasure, men, women, life and death. It is his gift to tell you about these things through poetry.