Book Review: What Went Wrong in Ohio: The Conyers Report on the 2004 Presidential Election 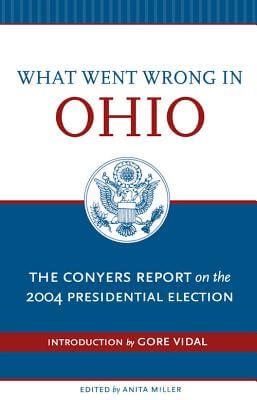 Read a Description of What Went Wrong in Ohio: The Conyers Report on the 2004 Presidential Election

With the November elections just over the horizon, this might be as good a time as ever to take note of what happened in Ohio in 2004 in order to be vigilant that such wholesale disenfranchisement of black voters does not re-occur. Afterall, during the Civil Rights Movement of the Sixties, thousands of activists put their lives on the line, going to jail, being attacked by police dogs, knocked over by high-pressure fire hoses, some even being lynched just for attempting to participate in America's political process.

For this reason, it is so infuriating to learn of the lengths that the Republican Party were willing to go to steal both the 2000 and 2004 Presidential Elections by specifically denying African-Americans access to the voting booth. The dirty tricks employed in 2004 are detailed in What Went Wrong in Ohio, a federal report published by a Judiciary Committee presided over by Congressman John Conyers.

The GOP-controlled election commission relied on ruses ranging from voter intimidation to purging the polls to discarding ballots to outright fraud. For example, heavily-Democratic black neighborhoods there was only 1 voting machine for every 650 registered voters, while white areas enjoyed a ratio of 1 to 100. In addition, the NAACP complained about an absence of ’curbside voting machines for seniors and disabled voters.’

To add insult to injury, the Republican Party dispatched thousands of partisan challengers to question the legitimacy of minority voters at the last minute before they were about to enter the voting booth. Why? It was their hope that ’the resultant distraction and delay could give rise to chaos and a level of voter frustration that would turn qualified electors away from the polls.’

All of the above resulted in long lines with up to ten-hour waits in some African-American communities, which meant that many were discouraged due to the pressures of jobs and other obligations. Regrettably, even if they did persevere and cast a ballot, there was no guarantee that their voted would be counted.

In black neighborhoods, a disproportionate percentage of provisional ballots were ruled invalid. Also, a very successful voter registration campaign was completely undermined when the state arbitrarily decided to disallow any forms not printed on white, uncoated 80 lb. paper. Well wouldn’t you know that the thousands of blacks who had registered on thin, colorful placemats provided by their local McDonalds ended up disenfranchised.

Republican-dominated Miami County had an unheard of turn out of 99%, 65% for Bush. But get this, 19,000 mystery votes were somehow added to the original tally after all the precincts had already reported, increasing only the President's percentage. Need I go on? Suffice to say that it's high time that anyone concerned with equality face the fact that the American electoral process is sorely in need of an overhaul and U.N. observers stationed at the polls, if the integrity of this rotten post-democracy is ever to be re-established.

Read Chicago Review Press’s description of What Went Wrong in Ohio: The Conyers Report on the 2004 Presidential Election.