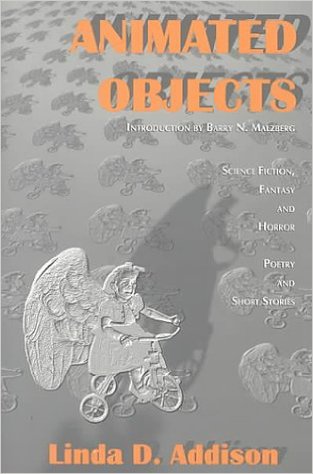 Read a Description of Animated Objects

I was very impressed with Animated Objects by Linda Addison.   It was written by a person who truly loves and enjoys the horror and fantasy   genre.  I enjoy horror and fantasy stories.  A little "blood and gore" in a story could make for an interesting evening.

I enjoyed and appreciated &ldsquoThe Night Bird&rdsquos Shadow Unveils Dark Song,&rdsquo it starts with the rebirth and ends with the death of the Night Bird. In reading this poem, it was as if I was right there in the heart of the evolution of this large life-like creature, experiencing all the facets of his beginning to end.

Another story I was taken with was &ldsquoThe Box,&rdsquo this story spoke of one woman's lost of memories, memories so vague, that they just do not exist any longer.  Stolen memories all secured in a box, feelings all hidden in pictures, slowly fading away with no face to it.  In this story I could see the faces of a few of my friends who have experienced this type of life, just holding on to a box with faded memories, no dreams just memories, hoping things will eventually be like the box of memories but in the meantime nothing is changing and finally life is just like that box, faded memories.

I also enjoyed &ldsquoLittle  Red in the Hood,&rdsquo an adult fantasy version of &ldsquoLittle Red Riding Hood,&rdsquo just that Red is old now, hanging out in the bar with her friends the fox, the pigs just waiting for a call to do another story of their infamous past, just hoping that there will be no competition with the Power Rangers, Big Bird or Barney.