Book Review: From Ike to Mao and Beyond: My Journey from Mainstream America to Revolutionary Communist 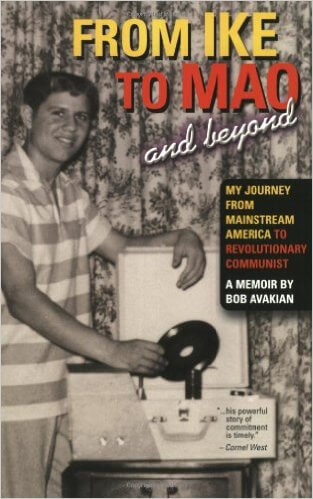 Read a Description of From Ike to Mao and Beyond: My Journey from Mainstream America to Revolutionary Communist

Like many red-blooded American boys, Bob Avakian's early years were consumed with sports. The seasonal changes in his life were marked by some athletic endeavor, and in several of these sports he was better than ordinary. But what gives his journey, now at the beginning of its sixth decade, uncommon traits is the evolution from a star quarterback in high school to a noted activist and freedom fighter. That is, what factors and encounters occurred, pushing him from single-wing football to left wing politics?

This question and many more are insightfully ’ and sometimes amusingly ’ answered in Avakian's memoir, ’From Ike to Mao and Beyond,’ a progression which also properly frames his adventurous political odyssey.

Even more challenging for this man, whose Armenian youth in California introduced him to American bigotry and discrimination ’ particularly for African American readers, is the fact that he is white and an uncompromising member of the Revolutionary Communist Party. If we set aside these possible obstacles, waiting to be discovered is a principled individual whose association with the Black experience provides a different, and, at the same time an interesting way, in which to comprehend certain organizations and their well-known leaders.

Naturally, as a Black reader, I was drawn to a couple of middle chapters of the book where Avakian delivers his take on the Black Panther Party. This is not done, however, until after he recalls Malcolm X and how this great leader influenced his political and revolutionary development. ’I loved to listen to Malcolm X speeches,’ Avakian writes. ’At one point, I got a recording of ’The Ballot or the Bullet,’ and I listened to that over and over. Later, when I started making speeches myself, I drew a lot from Malcolm X, especially the way in which he exposed profound injustices and contradictions of the system so sharply.’

This adoration of Malcolm X, combined with Avakian's affiliation with the Free Speech Movement in northern California where he was a student, and the Cuban Missile Crisis were primers in his emerging radicalism, though he admits, at the time he still possessed anti-communist feelings.

His stance against racism and oppression was further annealed with his connection to the Black Panther Party, particularly the close association he had with Eldridge Cleaver. In fact, it was during a visit to Cleaver's home and seeing a huge poster of Mao Tse-Tung on the wall that aroused his curiosity. Why a poster of Mao, he asked Cleaver. ’Because Mao Tse-Tung is the baddest motherf---er on the planet earth,’ Cleaver told him.

But it was not until Avakian met a former member of the Communist Party that his true indoctrination of communist theory began, and the groundings with this veteran communist would provide him a lasting analysis, guiding him through debates with other political formations that were less than revolutionary. Of all the formative lessons he learned on the path to revolutionary thought and practices, none were as critical as his experiences among the people, Avakian emphasized.

’There were many people who taught me many deep lessons,’ he recounted. ’I remember this one white proletarian youth who was really just a beautiful guy. He was open to learning a lot of things, but he also taught me a tremendous amount, coming from his whole life experiences and what the practical realities were, the difficulties of becoming politically active with the weight that was on him and on his mother, who was working a low-paying job trying to support the family.’

During the retrenchment period with the coronation of Ronald Reagan, intense pressure was placed on activists no matter their political stripe, and Avakian was a primary target. To ease the mounting repression of the Revolutionary Communist Party, which he has chaired since its inception in 1975, Avakian went into exile in France in 1981. Being in exile did not hamper his productivity or his leadership. Each issue of the ’Revolution,’ the RCP's paper, carries his probing articles, and none more insightful than when he deals with contemporary issues such as rap music, hip hop culture, and the ongoing war in Iraq.

Beyond the compelling ideological and philosophical ruminations from the book's early chapters, when all the fun of football vanishes and he struggles with a dreadful sickness, rests the evidence of Avakian's fortitude and resilience that are hallmarks of his character and integrity.

They say a photo is worth a thousand words, and there is one in the book that says it all. Avakian, in football gear, is seen running the ball through a horde of tacklers, eluding them with the help of an African American teammate. On the gridiron he was, ’a little guy’brimming with confidence’the field general,’ and that same determination, that will to win against the menace of racism, sexism, capitalism, and imperialism embodies his spirit on the political ramparts.

Read Insight Press’s description of From Ike to Mao and Beyond: My Journey from Mainstream America to Revolutionary Communist.