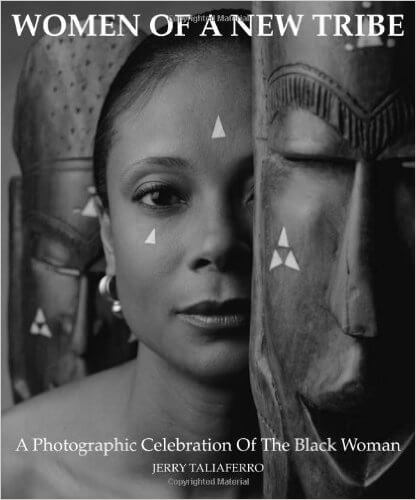 Read a Description of Women Of A New Tribe

"We have allowed the media to make us believe that we must have straight hair, light skin, thin bodies and ’European’ features to be considered beautiful. This book is not only an opportunity to reaffirm to all black women that we are ’fearfully and wonderfully made’ by God, but also an opportunity for everyone to see the emotions and beauty Jerry Taliaferro wrought through his camera lens.’
’Cheryl A. M. Waymer, mother and model, as excerpted from the Foreword (pg. 7)

’These beautiful women have always been around us. They are our wives, mothers, sisters, daughters and friends. We can see the beauty in them if just try. Perhaps in seeing their beauty, we will come to see what makes a woman truly beautiful’ Just maybe we will come to understand that real beauty is more than that which can be seen. Real beauty is that which lifts us, real beauty touches our hearts.’
’Jerry Taliaferro in the Preface (pg. 10)

Jerry Taliaferro is a West Point graduate who turned to photography full-time after leaving the military in 1988 following a decorated career in the service as a Special Forcers Officer. Over the intervening years, he has met with considerable success at his true calling, though devoting most of his attention to commercial assignments.

Recently, however, after preparing a single portrait of an African-American female originally intended simply to serve as a sample in his portfolio, Jerry was struck by the fact that ’Very little attention had been paid to the beauty of the black woman. The black woman was almost invisible.’ So, he came up with the novel idea of portraying sisters in a glamorous style from the Forties reminiscent of the classic, black and white fashion shoots of such classic Hollywood actresses as Greta Garbo and Katherine Hepburn.

The upshot of his efforts is an enchanting, emotionally-engaging and spiritually-stimulating masterpiece entitled ’Women of a New Tribe: A Photographic Celebration of the Black Woman.’ Taliaferro proves himself to be quite a gifted artist behind the camera with this eclectic collection of over 100 photos. For the images contained on the pages of this oversized, coffee table book achieve far more than merely capturing each model's physical beauty. No, the pictures also magically reveal an intimate aspect of the subjects' souls as well.

It is noteworthy that this groundbreaking tome features a rainbow of African-American females in terms of color, shape, size and age, and not just ones who meet a shallow Eurocentric standard of beauty. ’What about the jet black goddess with skin like glass, the caramel toned Amazon or the Great-Grandmother whose beauty defies time?’ the author asks in the Introduction. ’This book is an attempt to see them too.’

Indeed, a timely and overdue homage which wonderfully elevates and illustrates both the inner and outer beauty of all sisters, a segment of society generally taken for granted, if not denigrated by the mainstream culture.

Read To Be Determined’s description of Women Of A New Tribe.