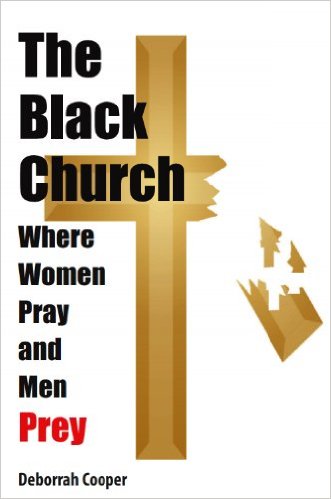 Read a Description of The Black Church: Where Women Pray And Men Prey

“If you are a single black woman regularly attending church and tithing, or you are a woman with children that accompany you to church, please open your mind to the expressed dangers within the walls of your house of worship, because far too often, black women go to church to pray to God, and black men are there to game on, feed on and prey on them like predators…
The ills suffered by women in black churches under patriarchal philosophies of male superiority are shocking. Throughout the pages of this book are real stories about churches and the pastors that run them.

These are true accounts of men charged with spiritual enrichment and development of communities—behaving in damaging, abusive ways toward women and children… My goal always has and always will be to expose uncomfortable truths in black culture in relationships.”
—Excerpted from the Introduction (pgs. xvi-xviii)

It’s hard to imagine that whoever coined the phrase, “The closer to church, the further from God,” could possibly have had as long a laundry list of complaints about Christianity as disbeliever Deborrah Cooper. Actually, Ms. Cooper’s issues are mostly with the black males in the Black Church, whether in the pulpits or the pews.

This fearless feminist levels so many accusations against brothers it’s frightening. But she does make a persuasive case by way of a compelling mix of statistics and anecdotal evidence.

She chides black females for being the most religious demographic in the country, since they’re getting little out of religion besides pie-in-the-sky promises. Meanwhile, their pastors are pressuring them to tithe 10%, even though such a directive is apparently nowhere to be found in the bible.

The author further alleges that an unholy arrangement exists whereby African-American women are basically being exploited by pimps posing as preachers. She says that these ruthless exploiters zero-in on the vulnerable and lonely with low self-esteem, make them dependent, promise them riches, and use a combination of seduction and intimidation to keep them under control.

Her incendiary verbiage will undoubtedly strike most folks as extreme, but Cooper sees stirring up controversy as her only hope of shaking sisters out of the doldrums. That’s why she summarizes by saying, “As long as black women allow themselves to be dazzled by fast-talking black men and their weapons of religion, we will always be at the bottom… Church leaders have proven themselves to be undeserving of your devotion or of your respect, and most certainly undeserving of your money.”

A damning indictment of black ministers as little more than predators in cleric’s clothing.

Read lulu.com’s description of The Black Church: Where Women Pray And Men Prey.