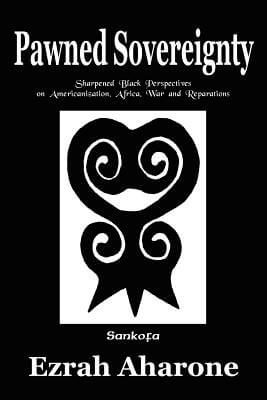 ’The character of America as a nation is very different from the image it projects to the world. Though its image seems like a beacon of peace and justice history verifies a character that covets economic power and is unhesitant in becoming violently disagreeable when others do not comply with its ways' Despite the so-called higher ideals of America's pillars, the progress of Black America was achieved as a result of struggle, fortitude, and death- not democracy, capitalism, or Euro-Christianity. Most astonishing of all, Euro-Americans have imposed their ways upon us so thoroughly, that we are expected to keep silent [about] what happened to us.’
’Excerpted from Chapter 5

Why have African-Americans remained frustrated in the elusive quest to be full fledged-citizens and participants in the American Dream? According to Ezrah Aharone, the answer lies in the fact that blacks may have been freed, but are yet to enjoy sovereignty. Aharone, who hails from Newark, New Jersey, headed to Africa soon after receiving a B.S. degree in business from Hampton University in 1980.

The 24 years spent in Ghana, Liberia and Togo help him develop the unique perspective reflected in the novel ideas contained in his book, Pawned Sovereignty: Sharpened Black Perspectives on Americanization, Africa, War and Reparations. The primary point he seeks to drive home, here, is that so long as blacks are a minority in this country, they don't stand a chance of ever achieving equality in a democracy unconcerned with its interests.

Therefore, what he advocates is sovereignty, via a declaration of independence of sorts, based on the ’inherent right that all people have to govern themselves without foreign influences or interferences.’ More an evolutionary than a revolutionary, the author calls for the cultivation of a sovereign consciousness whereby African-Americans re-think their worldview while weaning themselves off a political landscape with poor prospects for improvement.

As role models, he points to the Founding Fathers, long-revered for revolting over taxation without representation. He concludes, therefore, that the malingering second-class status of blacks is far less tolerable, making his bold blueprint for black sovereignty sound more like a long overdue prescription than an incendiary manifesto.