Book Review: True You: A Journey To Finding And Loving Yourself 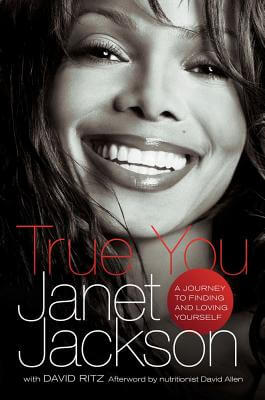 Read a Description of True You: A Journey To Finding And Loving Yourself

"Writing my first book was an adventure [which] comes from my heart with love… This is not an autobiography. It's a journey that I am still taking to love and accept myself just as I am.

I want you to walk this road with me. You can never be happy until you understand why you're doing what you're doing. If this book helps people find those answers, it has succeeded."
--Excerpted from the Acknowledgements (pgs. v-vi)

Whenever I've interviewed Janet Jackson, I've always had the sense that I was speaking with a very grounded individual for someone who was born inside the bubble of celebrity and has lived her whole life in the limelight. Thus, I am not surprised to discover that she would seem as real and equally accessible in her autobiography.

Janet co-wrote True You: A Journey to Finding and Loving Yourself with ghostwriter to the starsDavid Ritz, who has also penned memoirs with Ray Charles, Marvin Gaye, Aretha, Etta James, B.B. King, Smokey Robinson, Natalie Cole, Grandmaster Flash, Billie Holiday, The Neville Brothers and The Wire's Felicia "Snoop" Pearson. The prolific Ritz credits his uncanny knack for the genre with an ability to become one with his subjects by "absorbing himself into the artist's very heart and soul."

Such is certainly the case with True You, an unusually humanizing tome in which Janet is forthcoming about the host of challenges she's had to face in the public eye over the years, ranging from bouts with depression to overeating and yo-yo dieting. Despite her phenomenal singing and acting career, the five-time, Grammy-winning pop icon freely admits to having struggled with self-esteem issues.

Fortunately, Janet has finally broken free of the negative mindset, and she now has some sound advice for folks who might themselves be battling similar demons. She even shares some of her favorite, health-conscious recipes, an imaginative, mouth-watering menagerie with names like Strawberry Clouds, Oatmeal Pancakes and Cauliflower Popcorn.

Of course, this bio wouldn't be complete without her reflections about growing up a Jackson. Not to worry, such fond reminiscences are here in abundance, especially about her late brother, Michael, as well as family photographs featuring Janet from infancy to the present, and at every stage in between.

Read Gallery Books’s description of True You: A Journey To Finding And Loving Yourself.