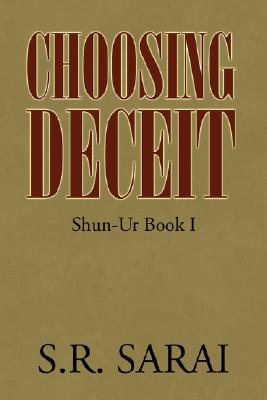 Read a Description of Choosing Deceit: Shun-Ur Book I

In this fantasy novel about the tenuous relationship man has with faith and spirituality, readers follow a young immortal named Lae on his quest to obliterate Kaar, the source of all evil. Fantasy-lovers will easily be drawn in as Choosing Deceit is reminiscent of beloved epics such as Tolkien's Lord of the Rings. Readers fascinated by tales laced with the history and rhetoric of Islam and Christianity will appreciate the many religious references included in this novel. But it is likely that both audiences will be disappointed as Sarai's world of distinct languages, good and dark magic, gods and immortals fails to deliver a satisfying story.

The bulk of Choosing Deceit revolves around the Mei, a race of immortals created by the gods to protect mankind from the evil of Kaar. They have been successful in doing so for thousands of years. However, recent events have made the Mei think that a man called the Proclaimer is bearing false witness and threatening to lead man away from the true and righteous teachings of the gods. Many men and women embrace the Proclaimer because he says he can show them how to wield kha’i, the spiral energy of the gods that few but the Mei know how to harness. This concerns the Mei, but they are even more troubled by young Lae's announcement that he has been summoned by the gods to take on Kaar by himself.

Although the Proclaimer and Lae's quest to battle Kaar are the two key sources of conflict, they are muddled by too many characters, points of view and sub-plots that do not serve the overall story. Lesser characters like Lae's best friend and love interest are given so much space on the page that they overshadow Lae. Add to that a parade of ancillary characters who are described in great detail but never show up again and the story begs the question: Who's story is this? Is it the story of Adham, to which the entire last chapter is devoted? Perhaps is it Shila's story, since the strained relationship with her father is deemed important enough to constantly interrupt the telling of Lae's journey.

As with many fantasy novelists, Sarai is ’world building’ in order to tell her story. But she thrusts readers into this new world without giving them a chance to truly experience the many cities, rituals, food, and civilizations she creates. That, plus the bombardment of near run on sentences and Sarai's unfamiliar language, leaves even the most seasoned fantasy reader stumbling through 407 pages. And, the glossary Sarai provides at the beginning of the book is not nearly comprehensive enough. Oftentimes, it feels as though Sarai has tried to cram several disparate stories into one book.

Does that mean there is nothing redeeming about Choosing Deceit? No, the story has potential. Some of its sub-plots and Islamic symbolism are interesting. It's also a treat to read a fantasy novel centered around people of color. Unfortunately, Sarai's strengths are overshadowed by her weaknesses, which then in turn distract the reader from the main plot and characters. If Sarai had woven her novel more tightly, readers might be given a fulfilling story, one with definitive answers and a ’pay-off’ for each sub-plot. Instead, Sarai hands her audience an incomplete work dependent on a follow-up book and unable to stand on its own.