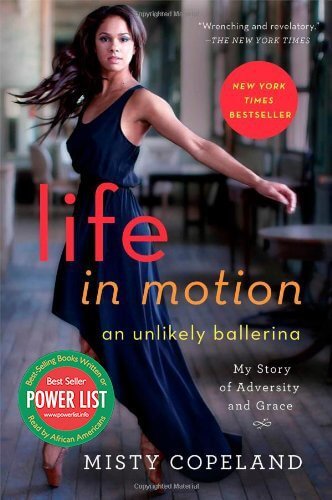 Read a Description of Life in Motion: An Unlikely Ballerina

“As the only African-American soloist dancing with the prestigious American Ballet Theatre, Misty Copeland has made history. But when she first placed her hands on the barre at an after-school community center, no one expected the undersized, anxious thirteen year-old to become a groundbreaking ballerina.

When she discovered ballet, Misty was living in a shabby motel room, struggling with her five siblings for a place to sleep on the floor. A true prodigy, she was dancing en pointe within three months of taking her first dance class, and performing professionally in just over a year: a feat unheard of for any classical dancer.

From behind the scenes at her first auditions to her triumphant roles in some of the most iconic ballets… Misty opens a window into the life of a professional ballerina… Life in Motion is a story of passion and grace for anyone who has dared to dream of a different life.”
—Excerpted from the inside book jacket

Who would ever have guessed Misty Copeland would one day become a world-class ballerina with the prestigious American Ballet Theatre? After all, she had a rocky childhood as one of six kids born to a struggling mother and several different fathers.

Plus, Misty and her siblings were raised in a rough L.A. ‘hood ruled by the Crips where you had to be careful to wear the right colors, not the sort of upscale locale one ordinarily associates with ballet. Furthermore, Misty couldn’t afford any lessons, let alone accoutrements such as shoes which alone can cost as much as $80 a pair. Then there was the fact that she was African-American and didn’t start training until the age of 13 when she enrolled in a class being offered by her local Boys and Girls Club.

Nevertheless, Misty miraculously managed to leap over or, should I say pirouette past, all of those hurdles in pursuit of a career in ballet as a featured soloist. And, ala Tiger Woods in golf and the Williams sisters in tennis, she’s blossomed into a black rarity excelling in a field where being white and from a privileged background are ordinarily prerequisites just to have a shot at making it.

Upon arriving in New York City at 16, Misty found herself ostracized by fellow ballerinas in the company on account of her color. Thus, it only makes sense that “This is for the little brown girls” might be an inspirational refrain repeated intermittently throughout her moving memoir.

A poignant primer proving the power of perseverance in the face of adversity.

Read Touchstone’s description of Life in Motion: An Unlikely Ballerina.