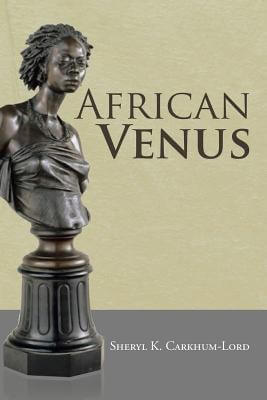 Read a Description of African Venus

The sculpture, on the cover of Sheryl K. Carkhum-Lord’s novel was created by artist by Charles Henri Joseph Cordier in 1851. Dubbed, by the artist, “Bust of an African Woman” it was later called “The African Venus” by critic Théophile Gautier. Little is known about the model of this magnificent sculpture. The pattern of her wrap, her heavy earrings and a coral necklace, indicate to scholars that the model may have come from the eastern part of the African continent.

What we do know is that Cordier, unlike his many of contemporaries, recognized the beauty of his subject and succeeded in capturing the dignity of the African woman. It is difficult to look at this sculpture and not wonder about the subject’s story. Who is she? Where did she come from? What happened to her? These questions are the genesis of Carkhum-Lord’s reimaging of the African Venus’ story.

Carkhum-Lord’s begins by introducing us to the massive realm of King Ghezo, which spans modern day Nigeria, Niger, Burkina Faso and Togo. King Ghezo is based upon an actual historical figure was well. Ghezo was the ninth King of Dahomey (now Benin), and ruled from 1818 to 1858. Ghezo was known for increasing his sizeable wealth and power through the selling of prisoners-of-war were sold into slavery.

Carkhum-Lord’s fictionalized account of historical events gives her license to delve into complexity of the global institution slavery had become by the 19th century. On the surface, this is a is the story of the model who posed for Cordier’s famous sculpture; however it is so much more. The African Venus is a sensitive history lesson; and much like Solomon Northup’s memoir, 12 Years a Slave, this is a story which you will reflect upon long after the pages are closed.

Carkhum-Lord’s book is technically a novelette, perhaps a long short story. At 48 pages, in length it can be easily read in a single sitting. Despite its length, it a lush tale spanning three continents, full of conflict, tragedy and ultimately hope. My fingers are crossed that Sheryl K. Carkhum-Lord next outing will be just as compelling but the length of a novel.