Book Review: Reversal of Trends: A Black Man’s Journey across the Mason-Dixon Line 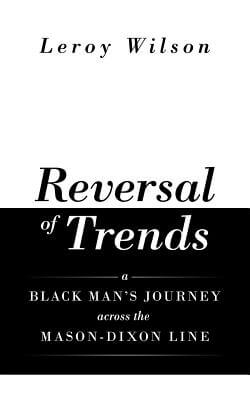 Read a Description of Reversal of Trends: A Black Man’s Journey across the Mason-Dixon Line

Often, memoirs can be self-indulgent, unimaginative, and a cheesy promotion of self. That’s not the case of this introspective, daring chronicle of Leroy Wilson, an area manager of a Fortune 500 firm. His quest for a meaningful, productive life forms the heart of this memoir, which is not the usual Horatio Alger tale of one’s rise from poverty to success, but a story of the courage, determination, and persistence of a Black man who refused to let the stigma of his color and situation block his potential.

Born in Bishopville, South Carolina, Wilson was transported as a baby from his teenage mother by his grandmother, Lula Bell Pearson, to Brooklyn, New York in 1962. As his grandmother aged, he grew into a street kid on the mean streets of the borough, becoming just another unruly Black youth dropout on the road to crime and a purposeless life. Here, Wilson handles the turbulence of puberty without the melodrama and bravado sometimes seen in these memoirs of angst and disillusionment.

His life is turned upside down when his grandmother is diagnosed with Alzheimer’s disease and his maddening descent into chaotic New York’s club scene, complete with partying and drinking. He starts to take stock of his life after seeing the decline of his old street chums, emotionally withdrawing from them and planning how to improve his life. He writes that he couldn’t assimilate into the Brooklyn scene because he was subject of rumors that he thought he was better than everyone else. He maintains his quiet while others “talked smack,” and that negative chatter isolates him from those around him.

“A plague and curse on our people,” Wilson writes. “It represented the seeds of everything negative afflicting our race; the precedence to every negative act that we perpetuate against one another. It is the basis of black on black crime; the spawn of self-hatred; a remnant of slavery; and the direct result of the niggerization of our people.” (pg. 28)

Once Wilson returns to familiar turf, to the South, he was out unemployed, living out of his car, and often crashing on a friend’s sofa. As his savings dwindles, he applies to several jobs, finally securing a position as a correction officer at the North Carolina Department of Corrections. The only requirement for the job is whether he could shoot an escaping inmate. That sickens him, but he accepts the post at the Piedmont Correctional Institute, where he realizes the officers are outnumbered by the inmates and violence could be spontaneous and brutal.

In the book, Wilson doesn’t mince his words:

“I hated the violence, the institutionalized homosexuality, the desperation, and the despair on the face of the inmate population, the coughing, the sickness, the fighting, the smell, the small lives appearing that much smaller by their confinement, and the negative energy.” (pg. 48)

Life teaches us many lessons, some difficult but others propel us along. Wilson, wanting to improve his lot, embraces education, with only a GED under his belt. He pursues a saving plan, complete with stocks, CDs and bonds. He moves into a home, although he can’t get comfortable with the classroom until he changed “his narrative.” He explains his evolution by saying he just wanted to get normal, wanted to fit in. Each choice, each job enables him to step from the shadows and soar above the institutional racism and class restrictions that the southern society imposes.

There is something irresistible about how Wilson breathes life into the minor and major characters from his life. This power of observation into life, both Black and white, male and female, puts his own existence into perspective. Often, the rhythm and focus are disrupted by a need to include some details of his past that could have been left out. However, the defects of this approach are easily forgotten by the sheer sweep of the author’s struggles and triumphs.

If this memoir rates your worthy approval, it is these words that comprise the spirit and soul of this man’s life:

“I hope it says loudly and clearly that your start does not dictate your finish. That no matter your obstacles: Abuse, racism, poverty, misogyny, fatherlessness or whatever else you have to deal with. No matter how many times you’ve been held back or knocked down. You can still rise up and you can still triumph. You can reverse the trend.” (pg. 260)

In a society filled with challenges and obstacles, the wisdom of these words can benefit so many in our Black community. Wilson’s crisp narrative builds on what has come before and informs what comes after that. He sees life with his heart and understanding that illuminates us all.

Read iUniverse’s description of Reversal of Trends: A Black Man’s Journey across the Mason-Dixon Line.