Book Review: What The Word Be: Why Black English Is The King’s (James) English! 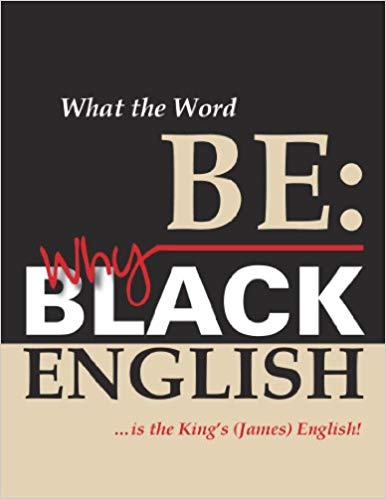 Read a Description of What The Word Be: Why Black English Is The King’s (James) English!

“Blacks came to the U.S. chained to each other but from different tribes. Neither could speak the other’s language. If two black people, at that bitter hour of the world’s history, had been able to speak to each other, the institution of chattel slavery could never have lasted as long as it did.

Subsequently, the slave was given, under the eye, and the gun, of his masterģ the Bibleģ and under these conditions the slave began the formation ofģ black English.”
—James Baldwin as excerpted in the Introduction (pages xiii-xiv) from his article “If Black English Isn’t a Language, Then Tell Me What Is?”

When most people talk about the “King’s English,” they’re referring to a very proper, aristocratic way of speaking in terms of grammar and syntax. That style is far afield from the uniquely African-American phraseology also known as Ebonics.

In fact, the pros and cons of teaching black English has been the subject of debate in recent years, with detractors arguing that it has no place either in the classroom or in polite society. Those naysayers might rethink that position after perusing What the Word Be: Why Black English Is the King’s (James) English.

For, according to its author, Diane Proctor Reeder, the roots of Ebonics can readily be found in the King James Bible, the text employed by most slave masters to teach Africans English. To prove her point, Ms. Reeder simply quotes from scripture, such as “Surely the people is grass,” which is found in Isaiah 40:7.

The playwright/editor/businesswoman came up with the idea for her opus after scouring the Good Book front to back several times and finding over 1,500 verses written in black English. Here, she carefully cites hundreds of those examples from both the Old and New Testament, including Exodus, Leviticus, Numbers, Job, Deuteronomy, Matthew, Mark, Luke and John.

Who knew that the Bible is riddled with such supposed mistakes as unmarked past and present tenses, subject-verb disagreements, double subjects, bizarre uses of the verb “to be,” pronoun insertions and absence of the copula? Nevertheless, to this sister, there’s a method to the madness, and what academics might denigrate as nails on the blackboard ghetto parlance may now more accurately be appreciated as a God-ordained vestige of slavery worth preserving. Reeder’s persuasive conclusion? “We learned how to speak the way we do because our ancestors learned to read with the King James Bible as their primary text.” You be feelin’ her?

Read Written Images’s description of What The Word Be: Why Black English Is The King’s (James) English!.