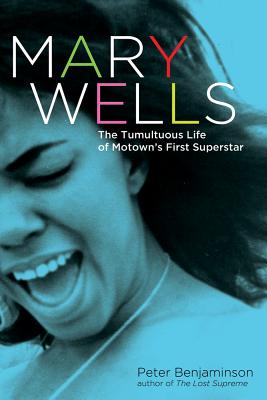 Read a Description of Mary Wells: The Tumultuous Life Of Motown’s First Superstar

One of the most captivating personalities on the Motown roster during its glory days, singer Mary Wells was a force of nature: complex, independent, and resourceful. With this new book about Wells, Pater Benjaminson, journalist and author of The Lost Supreme: The Life of Dreamgirl Florence Ballard, wants to do a good job of telling the Detroit native’s turbulent story from start to finish. It’s an impressive work, with interviews from family, friends, husbands, and lovers giving the readers the juicy parts.

From a tough urban background, Mary grew up without a father, and supported by a mother who cleaned houses. She was determined to make it, gifted with a powerful voice, and knowing to seize on an opportunity. Tired of singing with bands, Mary, then 17 years old, cornered Motown founder Barry Gordy at a local nightclub in 1960, completely confident, and sang an original song to him right there. Some say she was a better songwriter than singer, but the world found out about her talent within five years when her megahit, “My Guy,” smashed the charts to bits, holding the first place before the Beatles edged her out. From 1962 to 1964, Mary Wells was Motown’s top female act.

Although Mary always thought there were several girl singers, who could sing better than she did, that didn’t stop her. However, the Mary Wells phenomenon exploded in America and abroad, interesting the red-hot Beatles, who invited the singer to join them on their fall 1964 tour. The author keeps the singer upfront, noting how the 1962 hit, “Two Lovers” and the following success, “You Beat Me To The Punch,” influenced the early years of the English musical invasion.

With Gordy at the controls of the Motown empire, even the most profitable stars in his stable made very little cash, including Mary, who hated her Motown contract, which she said gypped her. Also, Gordy promoted Diana Ross and the Supremes, The Temptations, The Miracles, and Martha Reeves and The Vandellas, at Wells’ expense. Mary Wells left Motown at the age of 21, going through years of hit-and-miss success in her record career with a number of labels. Benjaminson mines these lean years for all their worth, moving her through a series of love affairs and marriages, drink and drugs, and bad managers.

Looking back, Mary regretted departing Motown and Gordy confessed he slighted the singer. Mary’s favorite drug was heroin. It bankrupted her just when he would get a leg up in the business. Never a healthy person, she pushed herself past her limits, touring almost nonstop. When Mary died in 1982 at 49 of throat cancer, her funeral was well-attended with many celebrities and her four children.

Revealing, provocative, and detailed, Benjaminson’s thoughtful portrayal of Mary Wells, a music pioneer and supreme pop stylist, is both striking and appealing.