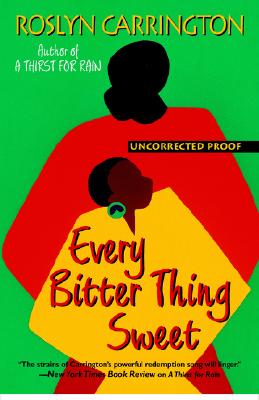 Read a Description of Every Bitter Thing Sweet

Every Bitter Thing Sweet picks up where A Thirst For Rain ends. While this is the story of Odile and Rory, Ms. Carrington continues her portrayal of the human acknowledgement, incorporation, and occasional exorcism of personal demons. The rain came and watered the seeds that were sown. Here, we see how those seeds have grown and if the crops are ready for harvest.

Odile is now in her early twenties, working as a bar maid at a local bar/gambling den. She is still adrift as what to do with her life; her relationship with her mother is strained at best; her former friend Rory moved away, and completing her education seems to be a dream denied. She is able to gain a bit of the comfort and status she seeks in both her romantic relationship with Vincent, the grandson of the bar's owne, Miss Ling. She gains a greater solace in her relationship with her little brother, Li'l Sebastian. Rory is also in his early twenties and no longer a scared, timid boy. A large man who is constantly encouraged to give up his life as a delivery boy for a pharmaceutical company and enter the boxing ring, Rory is determined to keep a lid on the killing rage that severely impacted his relationship with Odile and forced he and his father's relocation. He is trying lead as exemplary a life as possible, holding down a steady job to pay the bills as well as inadvertently support his father's alcoholism. Myra and Jacob return as background characters that provide stability as a foil to Odile and Rory's rudderlessness.

Odile and Rory's paths cross once again at the bar in which she works. Upon seeing each other they each realize that the events that precipitated in A Thirst For Rain have not been forgotten at all. The emotions that such events elicit require both Odile and Rory to do a lot of soul-searching and to reach out and not only ask for forgiveness of each other and the people that love them, but to provide it as well. Their struggles to do so capture the truth that to forgive is easy; forgetting is the more difficult thing to do.

Ms. Carrington's talent shines brighter in this sequel. I am pleased to see the development of Odile and Rory as adults and their unique challenges to leave their respective childhoods behind. I also like the development of Vincent; his ambition and single-minded focus serves as a handy mirror in which Odile can view herself and her nebulous blueprint for her life. Rory's eventual self-realization and subsequent increased self-esteem through boxing and his interactions with both Jacob and his father is a joy to behold; I found myself constantly rooting for him as the misunderstood underdog. The climax of the book is a nice surprise! Vincent's role in this is not only unexpected but also serves to tie up a lot of loose ends on the part of Odile and Rory's unfinished business. I would have liked to see a bit more development in the character of Miss Ling, but the lack thereof did not detract from the novel at all.

Again, Ms. Carrington uses depictive language that paints the story against the backdrop of the private Trinidad, a side that most tourists do not get to see. I am officially a fan of this author and have now made plans to visit Trinidad in the near future. Nothing but praise and admiration for this novel!