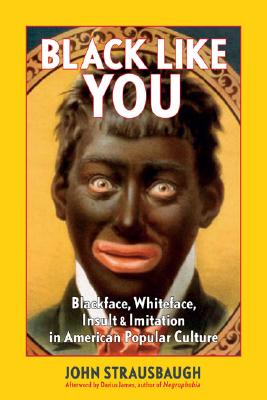 Read a Description of Black Like You: Blackface, Whiteface, Insult & Imitation in American Popular Culture

’Listening to Knipp, a white man, impersonating Shirley Q. Liquor, a Black woman, was one thing. Actually seeing a white man in blackface drag on a stage in New York City in the 21st Century was an entirely different experience’ there is much about Shirley that seems a throwback to more openly racist times. Her character is an easily recognized stereotype: the black welfare queen.

She's a single mother on government assistance, who claims she has never worked a day in her life. She speaks Ebonics with a broad Gulf States drawl.’ She has nineteen ’chirrun.’ In one of her routines, ’Who Is My Baby Daddy?’ she croons the children's names, including Cheetoh, Limbo, Curtis, Lemonjello, Orangejello, Kmartina, Velveeta, Cocoa Puffs, Maybelline, Gingivitis, Brylcreem, Nyquil and Sh*thead. She drinks malt malt liquor, smokes too much, drives a Cadillac’

At its best, Knipp's humor is inspired satire of an America seen from its lowest rung, poking equal fun at blacks and whites, rich and poor. At his worst, Knipp stoops to traffic in the lowest, most common, racist jokes.’
’Excerpted from Chapter 1, Blackface in the 21st Century

During the 19th Century, minstrel shows were responsible for providing the most popular and enduring form of entertainment across America. ’Coon shows,’ featuring characters with names like ’Jim Crow’ and ’Sambo’ toured the country with casts comprised of white clowns darkened by a combination of burnt cork and bright red lipstick.

In the first half of the 20th Century, such showbiz greats as Bing Crosby, Judy Garland, Shirley Temple, Al Jolson and Eddie Cantor could still be found performing in blackface whether on the Broadway stage or in Hollywood movies. But with the rise of the Civil Rights Movement, the practice finally fell in disfavor and was deemed socially unacceptable.

So, it naturally comes as something of a surprise to see that some folks are choosing to break the taboo in the 21st Century as we witness a resurgence of what had come to be considered a shameful stain on the nation's past. John Strausbaugh examines this phenomenon in Black Like You: Blackface, Whiteface, Insult & Imitation in American Popular Culture, a book which not only carefully chronicles the history of minstrelsy from its inception in 1832 through its assorted permutations right up to the present-day incarnations.

To a certain extent, the author blames gangsta’ rap for the genre's re-emergence, since that music's free use of the N-word has been seized upon by whites inclined to rationalize resurrecting the mindset of yesteryear. As Strausbaugh explains,

’The word ’nigger,’ which for decades was so taboo it could be rendered only as ’the N-word,’ began to resurface in the 1990s. While still extremely controversial and scandal-
provoking, its ubiquity in rap lyrics created a social context in which some white Americans have felt emboldened to use it as well.’

Though at times disturbing, as in its posture that hip-hop, as the latest form of minstrelsy, is simply carrying on a racist tradition of ridiculing African-Americans in most demeaning ways imaginable, Black Like You, nonetheless, simultaneously offers an excellent analysis of a dysfunctional culture perhaps already too permeated by self-hatred and an inclination towards the toxic mistreatment of minorities to bother adhering to any politically-correct ideals.

Another Review of Black Like You by Paige Turner

Blackface and minstrelsy have always been equal opportunity employers and offenders. Sammy Davis Jr. did the blackface thing along with Judy Garland, Bing Crosby, and most famously, Al Jolson.  The tradition is carried on today by entertainers like Michael Jackson, Mick Jagger and the entire Wayans family.  Author John Strausbaugh explores why this fascinating and repulsive phenomenon continues to resonate in Black Like You: Blackface, Whiteface, Insult & Imitation in American Popular Culture. He states, "Blackface is still alive. Its impact and derivations -- including Black performers in "whiteface" can be seen all around us".

Black Like You provides a provocative history of entertainment, race relations, and politics in the United States.  It is almost breathtakingly good in its spot-on analysis of American popular culture.  Strasbaugh offers a palatable, accessible treatment that encourages readers to explore this thorny topic from the comfort of their living room chair. Despite Strausbaugh's highfalutin vocabulary he is earnest, engaging and presents excellent examples to underscore his points, weaving the threads of history, race, entertainment, politics, and communications into a meaningful explanation of who Americans are as a people and how we came to be.

The whole idea of blackface remains confusing, because the boundaries of acceptable racial humor fluctuate hourly.  Does blackface celebrate or mock black Americans?  Interestingly control of images of blackness has mostly been in the hands of whites.

In the 1830s minstrelsy was a way of life akin to rock and roll for white American youth, exhibiting their rowdiness and bawdiness in a liberating way nothing else could.  Minstrel shows bloomed like dandelions, recalling a falsely idyllic image of Dixieland during a time when America was becoming increasingly industrial and urban.  Americans were also befuddled and wary of changes in social order caused by newly freed slaves and new European immigrants.

Minstrelsy keeps resurfacing, resonating in TV shows like Martin, The Parkers, Sanford and Son, Good Times, and Laugh In.  In this new millennium remnants of minstrelsy are seen in hip-hop videos.  The latest variation -- whiteface minstrelsy -- is a mainstay of performers like Eminem.

Black Like You delivers all the qualities that make for pleasurable, worthwhile reading.  The book's lack of an index is irksome, preventing readers from zoning in on topics that pique their interest. Fortunately Strassbaugh's witty and intelligent writing is worth the trip.

Race relations in America is a prickly-touchy subject, mostly handled gently or evaded altogether, but it is indisputable that America and the world are elevated by the cultural contributions of African Americans.  Black Like You reinforces that the lion's share of our joy stems from embracing the black part of America's identity.

Read Another Review of Black Like You on AALBC.com by Kam Williams
http://aalbc.com/reviews/black_like_you1.htm