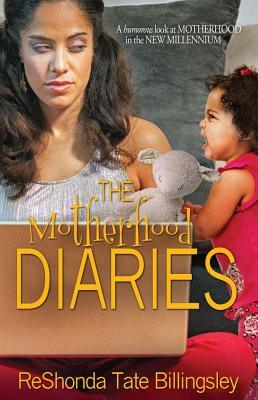 Read a Description of The Motherhood Diaries

“Ever since I was a little girl, I’ve kept a diary… Instead of writing out all the shenanigans of my life on paper, I [now] share them with five thousand of my closest friends on Facebook… As the mother of wonderful, precious children, ages 13, 10 and 5, I think I’ve got this motherhood thing down, so I have some stuff worth sharing…

On social media, I got immediate reaction from my updates on my never-a-dull-minute life… It was from reading some encouraging words on Facebook and Twitter that I came up with the idea for this book…

The Motherhood Diaries is all about exploring the good, the bad, and the ugly side of my motherhood path… It’s for women who complain, fuss and rant about their kids but will go Mama Tiger crazy if you mess with one of their babies.”
—Excerpted from Introduction (pages ix-xi)

This is an age where many career women find themselves frustrated in the attempt to balance motherhood and work. One person who has met that challenge with flying colors is ReShonda Tate Billingsley, a sister who has figured out how to flourish professionally while raising three children with the help of her husband.

This remarkable Renaissance woman is not only the prolific author of over 20 best-selling books but is also a radio talk show host, a newspaper editor, a ghost writer, an actress and an inspirational speaker. On top of all that, she is currently producing the upcoming screen adaptation of one of her novels, “Let the Church Say ‘Amen!’” which is being directed by Regina King.

Since she’s kept a journal for as long as she can remember, ReShonda decided to share some of the secrets of her success in a book chronicling the ups and downs of her hectic life. Entitled, “The Motherhood Diaries: A Humorous Look at Motherhood in the New Millennium,” the author gives the subject-matter a light touch in a folksy fashion which has this critic thinking of her as the black Erma Bombeck, if that name means anything to you.

Each chapter opens with a comical quote from a journal entry, like “My 4 year-old needs a muzzle” and “Why is it I’ve turned into a lush?” followed by an elaboration of the incident that prompted ReShonda to have that thought. Between being blessed with the knack for narrating an anecdote and a comedienne’s gift for making observational insights about everyday occurrences, she’s a natural for weaving a winning memoir.

While the first half of the timely tome is comprised exclusively of ReShonda’s pithily-delivered pearls of wisdom, the rest of the opus is devoted to the relatively-sobering reflections of a couple dozen other moms. For instance, there’s Lorna Lewis’ “Diary of a Grieving Mother,” Raquel Rogers’ “Diary of a Forgetful Mom,” Edna Pittman’s “Diary of a Special Needs Mother,” Crystal Brown Tatum’s “Diary of a Breast Cancer Survivor,” Jamesina Greene’s “Diary of a Depressed Mom,” Miranda Parker’s “Diary of a Mom with a Disability,” and Lichol Ford’s “Diary of a Welfare Mom,” to name a few.

Overall, this alternately comical and heartbreaking collection adds up to a compelling compendium of refreshingly-honest conversations about modern-day motherhood.