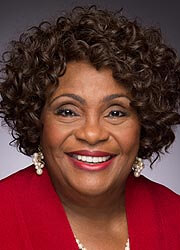 Barbara A. Robinson is an author, businesswoman, educator, lecturer, and Radio Talk-Show Host. From January 10, 2003 – December 21, 2016, she represented the 40th legislative district in the Maryland Senate.

Named in "Personalities of America: Fourth Edition," Barbara is a free-lance writer with several published articles to her credit.

Barbara is a 1995 winner of the National Avon and SBA Women of Enterprise Award; a 1996 inductee into the Maryland Women’s Hall of Fame; a 1996 Baltimore City WBE/MBE for the month of February, and a 1996 honoree of the National Business League and the Small Business Administration’s 1999 Welfare-to-Work Entrepreneur.

Barbara has been an adjunct professor on the faculty of several colleges in Maryland; she taught inmates at Jessup prison for seven years. She is the co-founder and past president of the Minority Women Business Owners Association of MD, VA, and DC. She is the first woman and the first African-American in Maryland to hold positions of Deputy Administrator of the District Court, the Supreme Bench, and the Circuit Court.

1 Book by Barbara A. Robinson

Eyes of the Beholder