When Wil Clay was three years old, he started trying to copy pictures out of the Sunday comics. His mother encouraged his interest, and Clay grew up knowing he wanted to be an artist. He studied art in high school at Macomber Vocational School in Toledo, Ohio, and later at the American Academy of Art in Chicago, the Vesper George School of Art in Boston, and the University of Toledo. Concentrating on graphic arts, he maintained a studio in Providence, Rhode Island, for seven years, and later in Houston, Texas, where he remained for 17 years before returning to his hometown of Toledo to work on fine arts and sculpture. Clay never really considered working in children’s books until 1989, when author Jan Wahl visited his Toledo studio and asked him to illustrate a book. “I thought he was kidding,” says Clay. “It took three visits to my studio for him to convince me that he was serious.” The two produced the popular Tailypo! and later collaborated on Little Eight John, which received the Coretta Scott King Honor Award in 1993. Now he enjoys working on approximately one children’s book a year, in addition to his other artwork, and he makes many school visits, entertaining students and teachers alike with his storytelling skills. 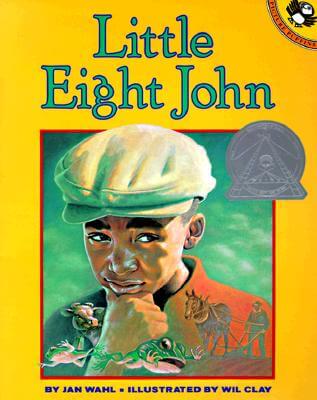