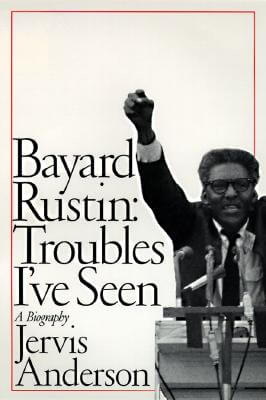 Bayard Rustin’s influence on American culture is perhaps immeasurable. He played a key role in infusing the Civil Rights movement with the principles of nonviolence; one of the movement’s ablest strategists, he was responsible for organizing two of its most momentous events.

In this biography, Jervis Anderson, who once worked with Rustin, describes the life of this leading Black intellectual from his imprisonment as a conscientious observer during WWII to his relationships with Dr. King, A. Philip Randolph, Roy Wilkins and Dorothy Height and the controversy he caused in his later years when he took issue with certain aspects of the Black Power movement. Written with the cooperation of Rustin’s friends and colleagues, and with complete access to his personal papers, this is the definitive biography of one of the most important heroes of the Civil Rights movement.

As organizer of the 1963 March on Washington, the Montgomery bus boycott, and architect of the Southern Christian Leadership Conference, Rustin’s influence on American culture has been immeasurable. Written with complete access to Rustin’s personal papers, this biography delves into the character of this influential man. Photos.

Review from Kirkus :
A vividly rendered life of a critical figure in the African- American struggle for civil rights. Bayard Rustin, writes New Yorker staff writer Anderson (This Was Harlem, 1982), was a man of sometimes contradictory parts—so much so that at his funeral service a friend described Rustin (19121987) as ``a Quaker without an ounce of goodyness; an ex-communist without a trace of vindictiveness; a Gandhian without one trace of holiness; an ex-con without one trace of self-pity or self-dramatization; a passionate advocate of civil rights who wasted little time brooding about racism.’’ He was also an intellectual of complex, learned tastes, a collector of art and textiles, a skilled interpreter of Bach and Donizetti, a champion of Alvin Ailey’s dance company, and a fine athlete.

Drawing on interviews with dozens of Rustin’s acquaintances and colleagues, Anderson recounts the activist’s contributions to African-American culture and to the work of organizations like the Southern Christian Leadership Conference and the Congress for Racial Equality. Jailed for 28 months for refusing conscription during WW II, Rustin was also an early disciple of Gandhi, and it was he who made the Indian pacifist’s ideas an important part of Dr. Martin Luther King’s program. Those ideas were lost in the militancy of the late 1960s and early ’70s, Anderson writes, and Rustin’s role in the movement was diminished. Anderson carefully examines Rustin’s many contributions to the civil-rights movement, noting that ``no important black figure of his generation responded to as many causes in which the values of democracy and fair play were at stake.’’ Although he never achieved prominence as a leader in these causes, and indeed was marginalized in many of them, Rustin was, Anderson maintains, of inestimable importance in making them known. This well-written biography is a fitting tribute to a great civil libertarian.

More books like Bayard Rustin: Troubles I’ve Seen: A Biography may be found by selecting the categories below: