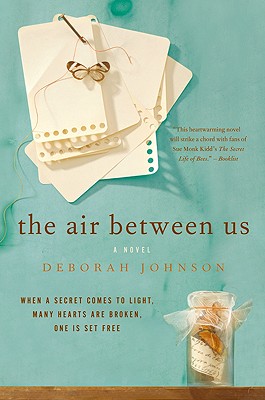 The Air Between Us: A Novel
by Deborah Johnson

Book Description:
Revere, Mississippi, with its population of "20,000 and sinking," is not unlike most Southern towns in the 1960s. Blacks live on one side of town and whites on the other. The two rarely mix. Or so everyone believes. But the truth is brought to the forefront when Critter, who is only ten, black and barely tall enough to see over the dashboard, drives Billy Ray—wounded in a suspicious hunting accident—to the segregated Doctor’s Hospital. Dr. Cooper Connelly, the town’s most high-profile resident, assures Billy Ray’s family he’ll be fine. He dies, however, and most people assume it is just a typical hunting accident—until the sheriff orders an investigation.Suddenly the connections between white and black are revealed to be deeper than anyone expects, which makes the town’s struggle with integration that much more complicated and consuming. Dr. Connelly takes an unexpectedly progressive view toward integration; the esteemed Dr. Reese Jackson, who is so prominent that even Ebony has profiled him, tries to stay above the fray. At times, it seems the town’s only distraction is the racially ambiguous Madame Melba, a fortune-teller and "voyeur" with a past.With endearing, fully realized characters and a mystery that will keep readers guessing until the final page, The Air Between Us will keep you engrossed until the end.

More books like The Air Between Us: A Novel may be found by selecting the categories below:

Tell us what do you think about The Air Between Us: A Novel.