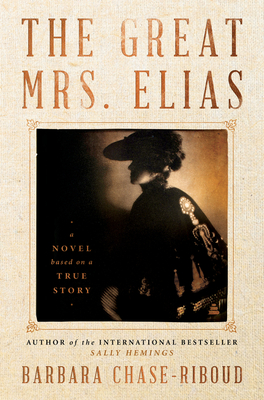 The Great Mrs. Elias: A Novel Based on a True Story
by Barbara Chase-Riboud

The author of the award-winning Sally Hemings now brings to life Hannah Elias, one of the richest black women in America in the early 1900s, in this mesmerizing novel swirling with atmosphere and steeped in history.

The death of her lover at the hands of an old paramour brings the police to Hannah Elias’ glitzy, five-story, twenty-room mansion on Central Park West. It is beginning of an odyssey that moves back and forth in time and reveals the dangerous secrets of a mysterious woman, the fortune she built, and her precipitous fall.

Born in Philadelphia in the late 1800s, light-skinned Hannah Elias has done things she’s not proud of to survive. Secretly married to a white man whom she divorces before relocating to New York, the ambitious woman dreams of becoming as rich as a robber baron. Passing as a Southern European, she quietly invests her alimony in the stock market, and begins to grow her fortune with the help of white businessmen. As the money pours in, Hannah hides her millions in two merchant banks, spreading it across 129 private accounts. Finally attaining the life she’s always dreamed, she buys a mansion on the Upper West Side and decorates it in Egyptian designs, gold, and fine d cor, inspired by her idol, Cleopatra.

But her lover’s murder turns Hannah’s world upside down and threatens to destroy everything she’s built. When the truth of her racial identity is uncovered, thousands of protestors gather in front of her stately home. Hounded by the salacious press, the very private Mrs. Elias finds herself alone, ensnared in a scandalous trial, and accused of stealing her fortune from whites.

Packed with glamour, suspense, and drama, populated with real-life luminaries from the period, The Great Mrs. Elias brings a fascinating woman and the age she embodied to glorious, tragic life.

Books similiar to The Great Mrs. Elias: A Novel Based on a True Story may be found in the categories below: