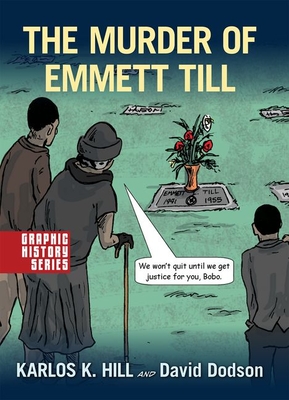 The Murder of Emmett Till: A Graphic History
by Karlos K. Hill, Illustrated by Dave Dodson

Paperback Description:
"Karlos Hill’s graphic history of the murder of Emmett Till brims with energy. The graphic rendering brings the 60-year-old story into the present. The illustrations cut through the decades, revive the intimacy and horror of the distant story, and remind us that the racism that killed Till is still very much alive. At the same time, the extended critical context keeps the graphic history anchored firmly in fact. Moving between poignant illustrations and incisive commentary, Hill’s The Murder of Emmett Till: A Graphic History just may become the go-to text for a new generation of students."—Dave Tell, University of Kansas, author of Remembering Emmett Till
"The strength of this book is the depth and scope in which it explores the Till case. Students and other readers who are familiar and unfamiliar with the text will come away from it learning something new about the Till family, the whistling incident, the murder, and the trial."—Ashley D. Farmer, University of Texas, Austin

"The tragic story of Emmett Till riveted American freedom movements to bold new strategies fifteen years after his death at the hands of white terrorists in Mississippi. As brilliantly captured in this engaging graphic history, that story will rivet your attention as well. The book is drawn with spare beauty, narrated with simple power, and accompanied by an authoritative historical essay on the eventful times in which the Chicago teenager lived, died, and was stirringly remembered. This is a perfect book for so many college courses and will surely be read eagerly outside of them as well."—David Roediger, University of Kansas, author of How Race Survived U.S. History

"Karlos Hill’s graphic history is painfully accurate. It shows how the murder of Emmett Till helped to dramatically change the political and social norms of the United States in a relatively short period of time."—Eric R. Jackson, Northern Kentucky University

"This text is timely in terms of its genre and historical content. It addresses the false accusation made by Bryant, and the nuance of Bobo’s personality as a prankster. History presented in this way will reach a broad audience."—Angela Flounory, University of Michigan-Dearborn

Books similiar to The Murder of Emmett Till: A Graphic History may be found in the categories below: