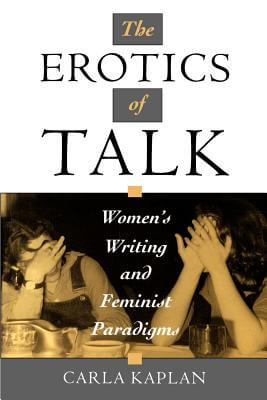 The Erotics Of Talk: Women’s Writing And Feminist Paradigms
by Carla Kaplan

Paperback Description:
Is feminism in "crisis?" With many feminists now questioning identification and focusing on differences between women, what is the fate of feminist criticism’s traditional imperative to rescue women’s stories and make their voices heard?

In this provocative rereading of the classic texts of the feminist literary canon, Carla Kaplan takes a hard look at the legacy of feminist criticism and argues that important features of feminism’s own canon have been overlooked in the rush to rescue and identify texts. African-American women’s texts, she demonstrates, often dramatize their distrust of their readers, their lack of faith in "the cultural conversation," through strategies of self-silencing and "self-talk." At the same time, she argues, the homoerotics of women’s writing has too often gone unremarked. Not only does longing for an ideal listener draw women’s texts into a romance with the reader, but there is an erotic excess which is part of feminist critical recuperation itself.

Drawing on a wide range of resources, from sociolinguistics and anthropology to literary theory, Kaplan’s highly readable study proposes a new model for understanding and representing "talk." She supplies fresh readings of such feminist classics as Jane Eyre, "The Yellow Wallpaper," Incidents in the Life of a Slave Girl, Their Eyes Were Watching God, and The Color Purple, revealing how their "erotics of talk" works as a rich political allegory and form of social critique.

More books like The Erotics Of Talk: Women’s Writing And Feminist Paradigms may be found by selecting the categories below: