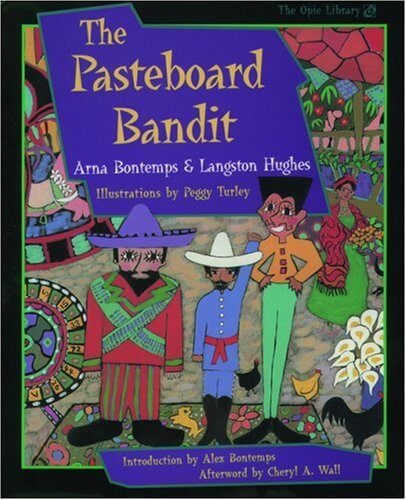 Hardcover Description:
In this delightful children’s tale, an American boy, Kenny Strange, moves to the quiet Mexican town of Taxco with his parents and strikes up a friendship with young Juanito P rez, a Taxco native. The two boys are brought together by an enchanting toy, the pasteboard bandit Tito. Chosen by Juanito at a town fair from among the other pasteboard toys, Tito, with his colorful clothes and bright eyes, becomes Juanito’s and Kenny’s constant companion, and the threesome share many adventures in and around the town’s rolling green hills. The boys’ growing friendship, Kenny’s introduction to a culture unlike his own, and Tito’s witty reflections on being a toy will be recognized instantly by anyone young or old who has ever made a friend or imagined that a toy might be real.
Originally written in 1935, but never before published, The Pasteboard Bandit grew out of several trips Langston Hughes made to Mexico during his lifetime. Hughes first went to the town of Toluca at age 5 to visit his father, and again when he was older. During these visits, Hughes met many writers and artists, and it is their influence that informs the story of The Pasteboard Bandit—a story of two cultures meeting. When Hughes left Mexico for the last time, at age 32, he was carrying the first draft for The Pasteboard Bandit.