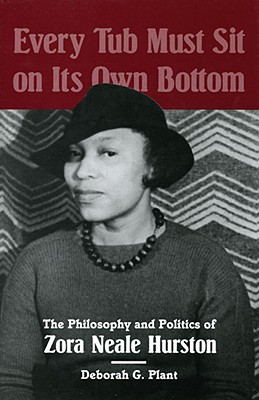 Every Tub Must Sit on Its Own Bottom: The Philosophy and Politics of Zora Neale Hurston
by Deborah G. Plant

Hardcover Description:
In a ground-breaking study of Zora Neale Hurston, Deborah Plant takes issue with current notions of Hurston as a feminist and earlier impressions of her as an intellectual lightweight who disregarded serious issues of race in American culture. Instead, Plant calls Hurston a "writer of resistance" who challenged the politics of domination both in her life and in her work.
One of the great geniuses of the Harlem Renaissance, Hurston stands out as a strong voice for African American women. Her anthropological inquiries as well as her evocative prose provide today’s readers with a rich history of African American folk culture - a folk culture through which Hurston expressed her personal and political strategy of resistance and self-empowerment.
Through readings of Hurston’s fiction and autobiographical writings, Plant offers one of the first book-length discussions of Hurston’s personal philosophy of individualism and self-reliance. From a discussion of Hurston’s preacher father and influential mother, whose guiding philosophy is reflected in the title of this book, to the influence of Spinoza and Nietzsche, Plant puts into perspective the driving forces behind Hurston’s powerful prose.

More books like Every Tub Must Sit on Its Own Bottom: The Philosophy and Politics of Zora Neale Hurston may be found by selecting the categories below: