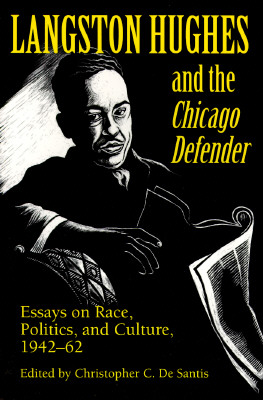 Book Description:
Langston Hughes is well known as a poet, playwright, novelist, social activist, communist sympathizer, and brilliant member of the Harlem Renaissance. He has been referred to as the "Dean of Black Letters" and the "poet low-rate of Harlem."
But it was as a columnist for the famous African-American newspaper the Chicago Defender that Hughes chronicled the hopes and despair of his people. For twenty years, he wrote forcefully about international race relations, Jim Crow, the South, white supremacy, imperialism and fascism, segregation in the armed forces, the Soviet Union and communism, and African-American art and culture. None of the racial hypocrisies of American life escaped his searing, ironic prose.
This is the first collection of Hughes’s nonfiction journalistic writings. For readers new to Hughes, it is an excellent introduction; for those familiar with him, it gives new insights into his poems and fiction.

More books like Langston Hughes and the Chicago Defender: Essays on Race, Politics, and Culture, 1942-62 may be found by selecting the categories below:

Tell us what do you think about Langston Hughes and the Chicago Defender: Essays on Race, Politics, and Culture, 1942-62.