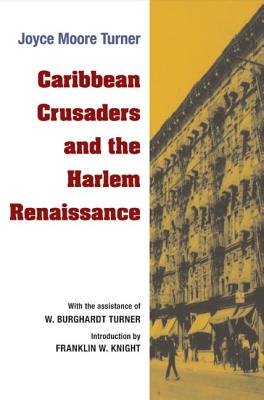 Caribbean Crusaders and the Harlem Renaissance
by Joyce Moore Turner

Book Description:
Caribbean Crusaders and the Harlem Renaissance is a study of the emergence of African American radicalism in Harlem, a crossroads of the African Diaspora in the early twentieth century. Turner reveals that the Harlem Renaissance was more than just an artistic fluorescence; it was also a political movement to counter racism and colonialism. To explore the roots of the Caribbean emigres’ radical ideology and the strategies used to extend agitation from Harlem to national and international platforms, the study draws on the papers and writings of Hermina Huiswoud, Cyril Briggs, the Reverend E. Ethelred Brown, Langston Hughes, and Richard B. Moore, as well as from interviews and biographies of related contemporary figures. It also incorporates census records, FBI files, and hundreds of documents from the recently opened Russian Archive. Through a focus on Otto Huiswood, the sole African American charter member of the Communist Party, and his wife, Hermina, Turner exposes the complex developments within the socialist and communist parties on the question of race. reveal the breadth, depth, and nearly global reach of the Afro-Caribbean activists’ activities. Joyce Moore Turner is the co-editor of Richard B. Moore, Caribbean Militant in Harlem: Collected Writings 1920-1972. W. Burghardt Turner is emeritus professor of history at the State University of New York at Stony Brook. Franklin W. Knight is Leonard and Helen R. Stulman Professor of History at Johns Hopkins University.

More books like Caribbean Crusaders and the Harlem Renaissance may be found by selecting the categories below:

Tell us what do you think about Caribbean Crusaders and the Harlem Renaissance.