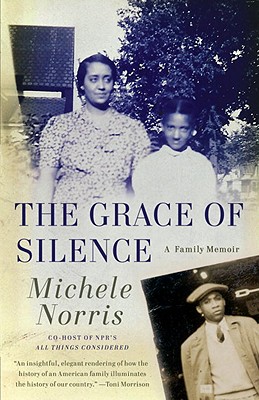 The Grace of Silence: A Family Memoir
by Michele Norris

ONE OF THE BEST BOOKS OF THE YEAR: San Francisco Chronicle, The Christian Science Monitor, Kansas City Star.

A profoundly moving and deeply personal memoir by the co-host of National Public Radio’s flagship program All Things Considered. While exploring the hidden conversation on race unfolding throughout America in the wake of President Obama’s election, Michele Norris discovered that there were painful secrets within her own family that had been willfully withheld. These revelations—from her father’s shooting by a Birmingham police officer to her maternal grandmother’s job as an itinerant Aunt Jemima in the Midwest—inspired a bracing journey into her family’s past, from her childhood home in Minneapolis to her ancestral roots in the Deep South. The result is a rich and extraordinary family memoir—filled with stories that elegantly explore the power of silence and secrets—that boldly examines racial legacy and what it means to be an American.

More books like The Grace of Silence: A Family Memoir may be found by selecting the categories below: