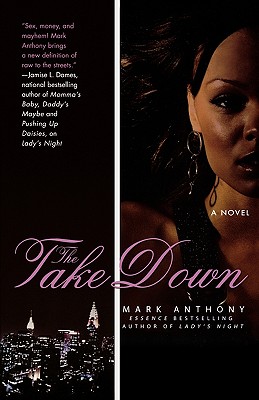 The Take Down
by Mark Anthony

Book Description:
While investigating one of hip-hop’s most successful music labels, Gun Clap Records, undercover FBI agent Jessica Jackson is willing to do anything to keep her identity a secret. She helps the Feds hit a grand slam during their investigation when they learn that Angela Calvino, the daughter of New York mafia boss Paulie Calvino, plans to start a hip-hop label with money from the Calvino family crime rackets. LaCostra Nostra Records will rise under the tutelage of Gun Clap Records’s feared and powerful CEO, and the Feds soon have what they need to take down both record labels. The only question is, did Agent Jackson cross the line to get the evidence she needed?