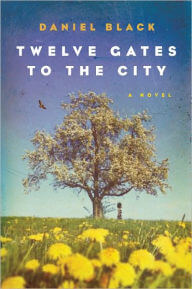 Twelve Gates To The City
by Daniel Black

A novel of self-discovery, family bonds and the healing of one small southern town

Twelve Gates to the City is the much-anticipated sequel to Black’s acclaimed debut, They Tell Me of a Home. In this novel, Sister assumes the voice of the narrator, speaking from the spirit realm, telling her brother TL things he could have never known about their family. She constructs the story as a series of spiritual revelations, exposing to readers both who she was in the years of TL’s absence and how every event in his life was an orchestration for his return.

TL in the meantime is back in Swamp Creek, to stay this time, but he’s still haunted by his sister’s death. His decision to become the Schoolmaster is the only thing he’s sure about, and his impact upon the students becomes palpable. But he still doesn’t know what happened to Sister. As he searches for ultimate truth, he discovers the secrets and beauty of Swamp Creek.

Twelve Gates to the City is a novel about spiritual revelation, and communal healing, ushered in by one who finally realizes that his gifts were bestowed upon him, not for his own glory, but for the transformation of his people.

Tell us what do you think about Twelve Gates To The City.