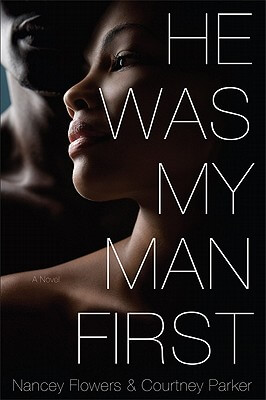 He Was My Man First
by Nancey Flowers and Courtney Parker

Book Description:
Valentine Daye is a product of the streets. Raised in the projects, she lost her father and her mother young. By fifteen, she was living the life with drug lord Colombo. But when Colombo and his crew are murdered, Richard Washington, one of Colombo’s many street runners, swoops in and wastes no time making Valentine his queen. Nine years later, Valentine and Rich are a happy couple who have weathered some "minor" problems. Valentine is well aware that Rich steps out on her. But doesn’t every man? He always finds his way home. Or at least he did before Vanessa Knight. Vanessa Knight is a woman who has everything . . . except Richard Washington. An heiress to a multimillion-dollar company, Vanessa is willing to forgive Rich’s flawed background. However, she wants him for herself, and tells him that he must decide what’s important to him—a flourishing career at clothier Jorge Jacobs, where she can make him a VP, or a life with his street past, Valentine?.When Daye meets Knight, each woman plots and schemes to steal Rich’s heart. Rich must make a decision. Does he gamble and start a new life with the beautiful and cunning Vanessa, or does he stay with his around-the-way girl Valentine, who has been with him through thick and thin?

More books like He Was My Man First may be found by selecting the categories below: