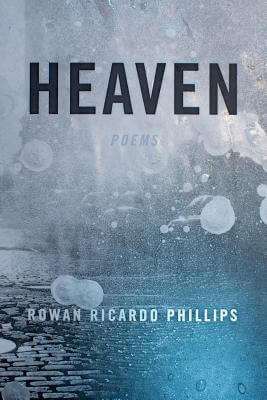 Long-listed for the National Book Award in poetryA spectacularly vibrant and continually surprising collection from one of the poetry world’s rising young stars"Who the hell’s heaven is this?" Rowan Ricardo Phillips offers many answers, and none at all, in Heaven, the piercing and revelatory encore to his award-winning debut, The Ground. Swerving elegantly from humor to heartbreak, from Colorado to Florida, from Dante’s Paradise to Homer’s Iliad, from knowledge to ignorance to awe, Phillips turns his gaze upward and outward, probing and upending notions of the beyond.

"Feeling, real feeling / with all its faulty / Architecture, is / Beyond a god’s touch"?but it does not elude Phillips. Meditating on feverish boyhood, on two paintings by Chuck Close, on Shakespeare’s Measure for Measure, on a dead rooster by the side of the road in Ohio, on an elk grazing outside his window, his language remains eternally intoxicating, full of play, pathos, and surprise.

"The end," he writes, "like / All I’ve ever told you, is uncertain." Or, elsewhere: "The only way then to know a truth / Is to squint in its direction and poke." Phillips?who received a 2013 Whiting Writers’ Award as well as the PEN/Joyce Osterweil Award?may not be certain, but as he squints and pokes in the direction of truth, his power of perception and elegance of expression create a place where beauty and truth come together and drift apart like a planet orbiting its star. The result is a book whose lush and wounding beauty will leave its mark on readers long after they’ve turned the last page.

Dawn. Two roosters stud the side of the road.
One of them is dead. The other stands there
Stiff in the car’s sudden breeze, staring out
Across the hilly Ohio highway,
Skyward towards that something slight of bright
Reds and pinks, a pallid rooster-feathered
Hue, as silent as the rooster standing
And as distant as the rooster on its side.
We drove by, my guide and I, too quickly
To know if one rooster was waiting for
The other, or which had been waiting–,
Or, if they’d planned to cross the road together
When suddenly something went terribly wrong
Either at the end of having crossed it
Or simply, as happens, during the wait.

The whole Ohio highway seemed to know, though,
Like the gate of Heaven you see at death
(As a light or a shining shunning darkness)
Knows Heaven without actually being
Heaven, being rather just a border,
Still part of our plausible world
Of parts, living and dead, male and female,
Color and color, belief and belief …
There’s really no reason to believe or
Not to believe what you see when you see it.
But when at speed I saw those two roosters
Trying to figure out what’s next for them
As the distances we travelled on the
661 swallowed them whole with wheat,
I looked from my passenger’s seat into
The car’s rearview mirror, and saw nothing
That was neither Heaven nor Ohio
As the horses stirred, and the steeples slept,
And the state flattened out like a mirror.
And am I not a mirror for that mirror?

More books like Heaven: Poems may be found by selecting the categories below: