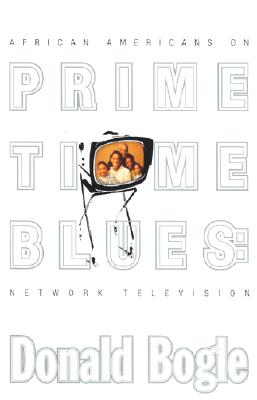 Book Description:
Primetime Blues is the first comprehensive history of African Americans on the network series. Donald Bogle traces the changing roles of African Americans on primetime — from the blatant stereotypes of television’s early years to the more subtle stereotypes of recent eras. Bogle also reveals another equally important aspect of TV history: namely, that television has been invigorated by extraordinary Black performers — from Ethel Waters and Eddie "Rochester" Anderson to Cicely Tyson, Flip Wilson, Redd Foxx, and those mighty power brokers Cosby and Oprah — who frequently use the medium to make personal and cultural statements, and whose presence on the tube has been of enormous significance to the African American community. Bogle’s exhaustive study moves from the postwar era of Beulah and Amos ’n’ Andy to the politically restless sixties reflected in I Spy and the edgy, ultra-hip characters of The Mod Squad. Bogle comments on the short-lived East Side, West Side, the controversial Julia, and the television of the seventies, when a nation still caught up in Vietnam and Watergate retreated to the ethnic humor of Sanford and Son and Good Times; and on the politically conservative eighties, marked by the unexpected success of The Cosby Show. He explores die-hard Bonded Buddies on such series as Spenser: For Hire, and those Teen Dream heroes of Miami Vice. Finally, Bogle turns a critical eye to the television landscape of the nineties — when Black and white viewers often watched entirely different programs — with shows such as The Fresh Prince of Bel Air, ER, and The Steve Harvey Show. He also examines TV movies and miniseries such as The Autobiography of Miss Jane Pittman and Roots. Ultimately, this important book gives us a history rich in personalities and tensions as well as paradoxes and achievements.

More books like Prime Time Blues: African Americans on Network Television may be found by selecting the categories below: