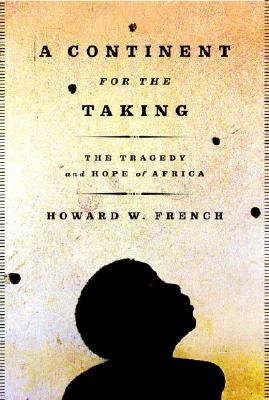 A Continent for the Taking: The Tragedy and Hope of Africa
by Howard W. French

Book Description:
Africa first captivated New York Times journalist Howard W. French more than twenty-five years ago, but his knowledge of and passion for the continent has the depth of a lifetime association. His experiences there awakened him as nothing before to the selfishness and shortsightedness of the rich, the suffering and dignity of the poor and the uses and abuses of power. And in this powerfully written, profoundly felt book, he gives us an unstinting account of the disastrous consequences of the fateful, centuries-old encounter between Africa and the West.

French delineates the betrayal and greed of the West often aided and abetted by Africa’s own leaders that have given rise to the increasing exploitation of Africa’s natural resources and its human beings. Coarse self-interest and outright greed once generated a need for the continent’s rubber, cotton, gold and diamonds, not to mention slaves; now the attractions include offshore oil reserves and minerals like coltan, which powers cellular phones.

He takes us inside Nigeria, Liberia, Mali and the Congo, examining with unusual insight the legacy of colonization in the lives of contemporary Africans. He looks at the tragedies of the AIDS epidemic, the Ebola outbreak and the genocide that resulted in millions of deaths in Rwanda and the Congo. He makes clear the systematic failure of Western political leaders the nurturers of tyrants such as Mobuto Sese Seko and Laurent Kabila, whose stories are told here in full detail and the brutal excesses of the CIA.

In helping us to better understand the continent, and indeed Africans themselves, French helps us see as well the hope and possibility that lie in the myriad cultural strengths of Africa.

More books like A Continent for the Taking: The Tragedy and Hope of Africa may be found by selecting the categories below:

Tell us what do you think about A Continent for the Taking: The Tragedy and Hope of Africa.