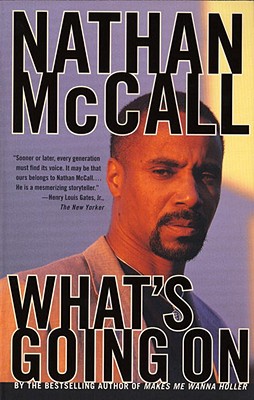 What’s Going On
by Nathan McCall

Paperback Description:
With the same personal authority and exhilarating directness he brought to his account of his passage from a prison cell to the newsroom of The Washington Post, Nathan McCall delivers a series of front-line reports on the state of the races in today’s America. The resulting volume is guaranteed to shake the assumptions of readers of every pigmentation and political allegiance.
In What’s Going On, McCall adds up the hidden costs of the stereotype of black athletic prowess, which tells African American teenagers that they can only succeed on the white man’s terms. He introduces a fresh perspective to the debates on gangsta rap and sexual violence. He indicts the bigotry of white churches and the complacency of the black suburban middle class, celebrates the heroism of Muhammad Ali, and defends the truth-telling of Alice Walker. Engaging, provocative, and utterly fearless, here is a commentator to reckon with, addressing our most persistent divisions in a voice of stinging immediacy.

More books like What’s Going On may be found by selecting the categories below: