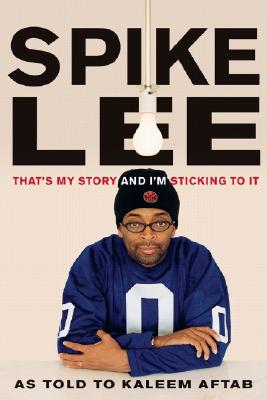 Spike Lee: That’s My Story and I’m Sticking to It
by Spike Lee

Book Description:
A candid account of one of America’s most provocative filmmakers that belongs on the shelf of any serious movie lover. Spike Lee tells the cinematic story of the preeminent director, whose pioneering films?from Do The Right Thing, Jungle Fever, and Malcolm X to 25th Hour , Bamboozled, and The Inside Man?helped transform the face of late twentieth-century America. With unprecedented access to the Lee family and new interviews with stars and celebrities?including Denzel Washington, Halle Berry, Rosie Perez, Adrien Brody, John Turturro, and many others?film critic Kaleem Aftab chronicles Spike Lee’s explosive rise to stardom, exploring such important issues as Black Nationalism, Hollywood stereotyping, and the rise of a powerful black middle class. Lee’s prominence in American culture continues in 2006 with the release of The Inside Man and a forthcoming documentary on Hurricane Katrina. Spike Lee tells us as much about the last two decades of American social history as it does about the life of this fascinating director.

More books like Spike Lee: That’s My Story and I’m Sticking to It may be found by selecting the categories below: