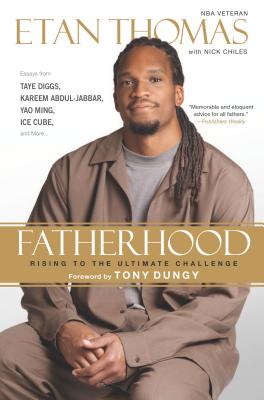 Fatherhood: Rising to the Ultimate Challenge
by Etan Thomas and Nick Chiles

Paperback Description:
In Fatherhood, beloved NBA player, poet, children’s advocate, and devoted dad Etan Thomas speaks from his heart on what matters most in his life: being there for his children. As a leading participant in President Obama’s Fatherhood Initiative, Etan has reached out to young men (often young fathers) in the juvenile detention system and in local communities. He knows firsthand the difference having a father in your life every day can make.
Now he brings together a chorus of voices to weigh in on the importance of being a father in our nation today and to share what they’ve learned from being a father, having a father, or in some cases not having a father around.
With Original Essays and Poems from

Through these inspiring personal experiences, Etan and the men he’s gathered together hope to share the message that by standing up and taking an active role as fathers, men not only find their own lives more joyful and fulfilling—they pass on to the next generation an unshakable legacy of love, wisdom, responsibility, and strength.

More books like Fatherhood: Rising to the Ultimate Challenge may be found by selecting the categories below: