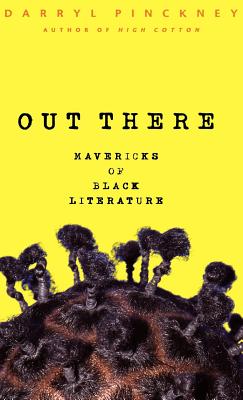 Out There
by Darryl Pinckney

Book Description:
With this appreciation of three very different black writers, novelist Darryl Pinckney reminds us that marginal or neglected literary figures have a lot to tell us about the history of a people who are always "outsiders." Born in Jamaica in 1883, J. A. Rogers was an early member of the Harlem Renaissance—a newspaper columnist, historian of Negro achievement, polemicist against white supremacy, and amateur sociologist of interracial sex as evidenced in his massive three-volume work Sex and Race. Vincent O. Carter, who came of age in 1920’s Kansas City, wrote The Bern Book, an exploration of being black in a Swiss rather than an American setting. Caryl Phillips, a son of the generation of black Caribbeans who returned to Great Britain after the Second World War, has explored the psychology of migration in fiction and nonfiction that include The Final Passage, Higher Ground, and The Nature of Blood. Pinckney’s essays on these writers, drawn from his Alain Locke Lectures at Harvard University, give us a rich understanding of what it has meant to be "children of the diaspora" over the past century.

More books like Out There may be found by selecting the categories below:

Tell us what do you think about Out There.